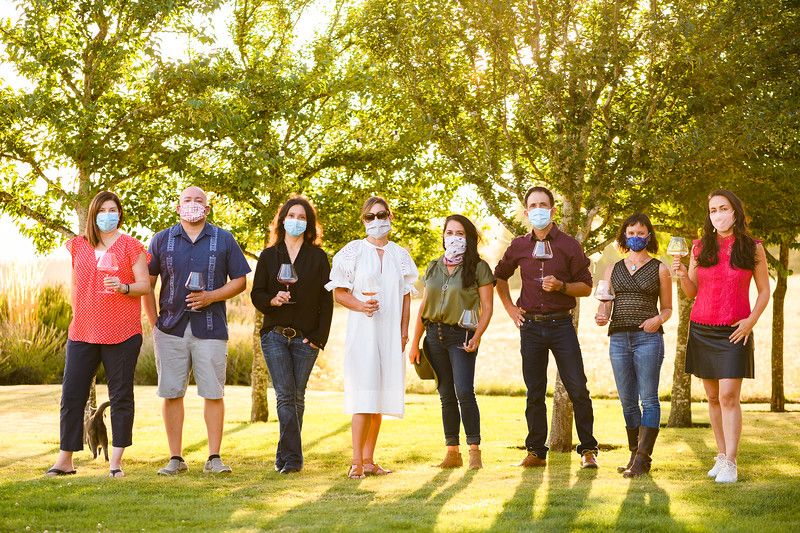 Hispanic Heritage Month celebrates and honors the rich history, culture and contributions of past and present Hispanics and Latinx in the United States.

This year, six Hispanic and Latinx Willamette Valley winery owners and winemakers are celebrating Hispanic Heritage Month (Sept. 15 - Oct. 15) by sharing stories that highlight the richness and diversity of Hispanic cultures and giving back to the community in Oregon.

The month-long Celebrating Hispanic Roots event, with the tagline, “Raíces Unidas... A small group of Oregon wineries honoring the roots that bring us together and move us forward” focuses on the cultural and literal vine roots that bring these business owners together in celebrating their small but growing coalition in the winemaking industry.

“I really wanted to celebrate the diversity of our cultures and backgrounds and share our personal stories. I was surprised that there was really nothing like this that spanned the entirety of the Hispanic region–from Mexico down to South America, the Caribbean and Spain. It was also very important for me to give back to our Spanish-speaking community here in Oregon. I feel like this is a great time to start this and hopefully it is just the beginning of something bigger,” says Ximena Orrego of Atticus Wine.

Participating wineries are offering a special wine or wine selection to commemorate this event and 10% of sales will be donated to the Latino Partnership Program of OCF, which funds efforts in education, leadership development and community bridge building  within Oregon’s Latinx/o community.

The group held virtual panels in English and Spanish on Oct. 1. Roxy De La Torre, an award-winning bilingual reporter, producer, and founder of Somos Media, moderated the Spanish language panel. Noted wine writer and host of the James Beard Award-Winning Four Top Podcast, Katherine Cole, moderated the English-language panel. Over 100 folks joined the Zoom virtual panels where they heard the winemaker’s share stories of hope, challenges and resilience in the industry. They shared the importance of celebrating their roots, giving back to the Latinx community and highlighted their desire to inspire more Latinx leaders to join Oregon’s winemaking industry.

“I feel this initiative is important because we’re striving to expand the narrative, and help shape a different story for our community - one that is about leading, owning, driving, and giving back… I choose to help and give back in a way that hopefully raises our presence, our visibility and our confidence to do more, be more and lead more,” says Carla Rodríguez of Beacon Hill Winery & Vineyard. 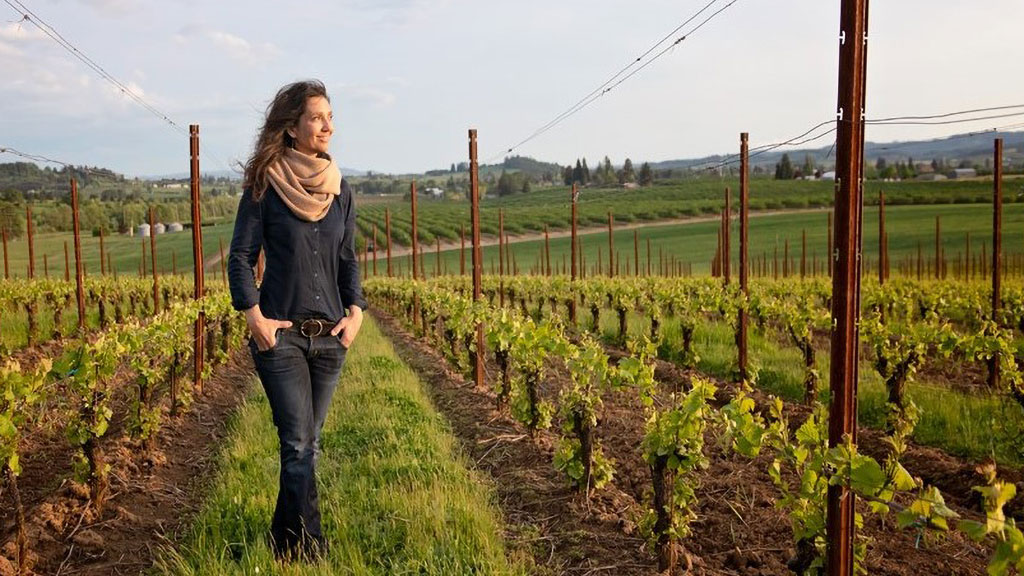 Atticus Wine is a family-owned micro-boutique producer of beautiful and distinctive Pinot Noir in the Yamhill-Carlton AVA of the Willamette Valley. Founded in 2005, it is the ongoing journey of love and dedication of Ximena Orrego and her husband Guy Insley. Ximena was born in Peru and grew up in Venezuela, Panama and Guatemala. After university in Canada she moved to Florida, where she met Guy. It was there that they tasted their first Oregon Pinot Noir and decided to visit the Willamette Valley on vacation. Before their trip was over, they had placed a bid on their property – their future had been sealed. They built their family home among the vines, creating a place where they can watch their children grow, be connected with the vineyard and coexist with nature. After many vintages learning, first as harvest intern and then actively working in the cellar, Ximena is now the winemaker for their wines. Her Latin American roots are part of her essence - key to who she is today, their wines and their business. 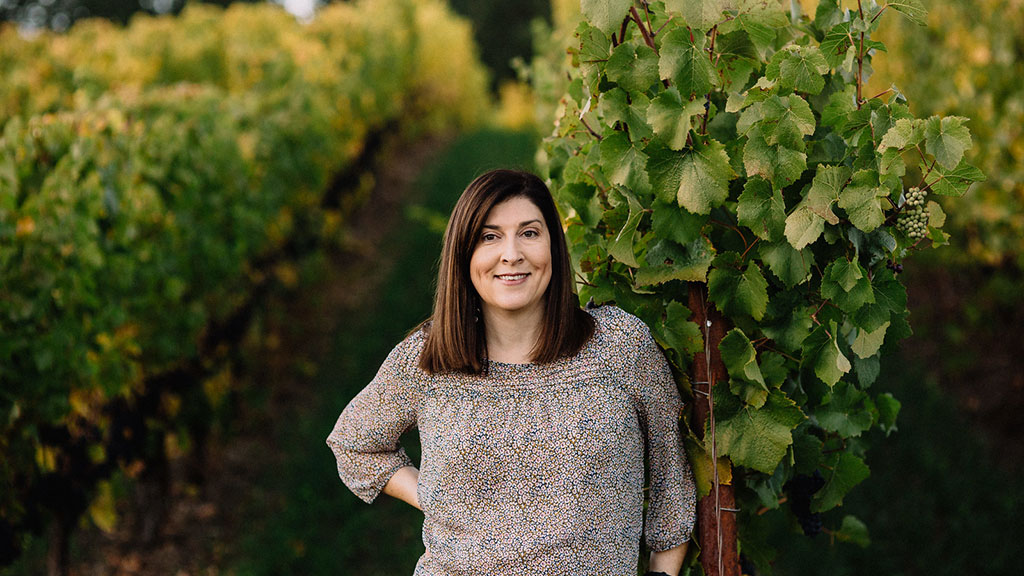 The youngest of five kids, Carla was born and raised in the Northern Mexican city of Torreón in the State of Coahuila. She moved to the US to pursue undergraduate and graduate degrees, which led to a job in high tech in Oregon. Shortly thereafter, she and her husband (George Hillberry) established Beacon Hill Winery & Vineyard in 2011.  Located in the Yamhill-Carlton AVA, Beacon Hill was the natural progression to their family’s existing vineyard properties (La Colina & La Sierra) in the Dundee Hills where they have been growing award-winning Pinot Noir since 1999.

Carla is responsible for overseeing daily operations of the tasting room, events, and guest accommodations at Beacon Hill Winery and continues to work full time as an executive in high tech, where she is also active in the Latinx Leadership Council, mentors other women and men and in 2012 was recognized by Hispanic Association for Corporate Responsibility (HACR) as a high-potential Hispanic at a Fortune 500 earning the Young Hispanic Corporate Achiever award. 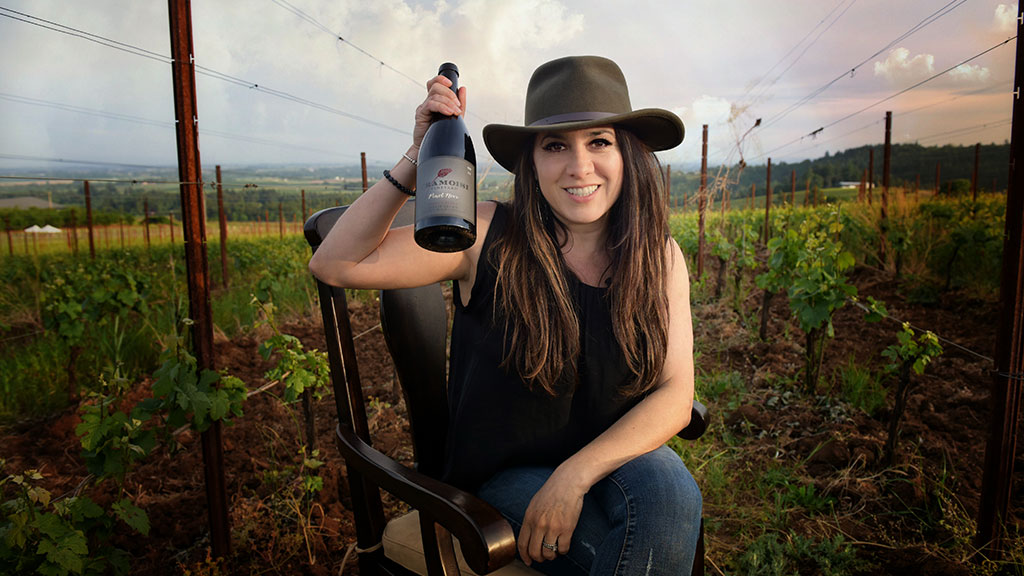 If there is someone proud about her heritage it’s Sofía Torres-McKay, Co-Owner of Cramoisi Vineyard and Winery and Co-Founder of AHIVOY (Asociación Hispana de la Industria del Vino en Oregon Y Comunidad), a prominent activist for Vineyard Stewards. Born in Mexico City, Sofía worked 19 years in the tech industry before moving to the United States in 2002 to pursue her career in corporate business. In 2011, Sofía and her husband Ryan McKay both invested their money and took a chance on 10 acres of property in the Dundee Hills of Oregon. They planted vines and started living their dream making small lots of boutique Pinot Noir! Sofía continues to be a passionate steward for diversity in the wine industry and teaches Vineyard workers the importance of Organic and Biodynamic farming. In 2019, Sofia was appointed to the Regional Solutions Advisory Committee–Mid Willamette Valley–by Oregon State Governor, Kate Brown. 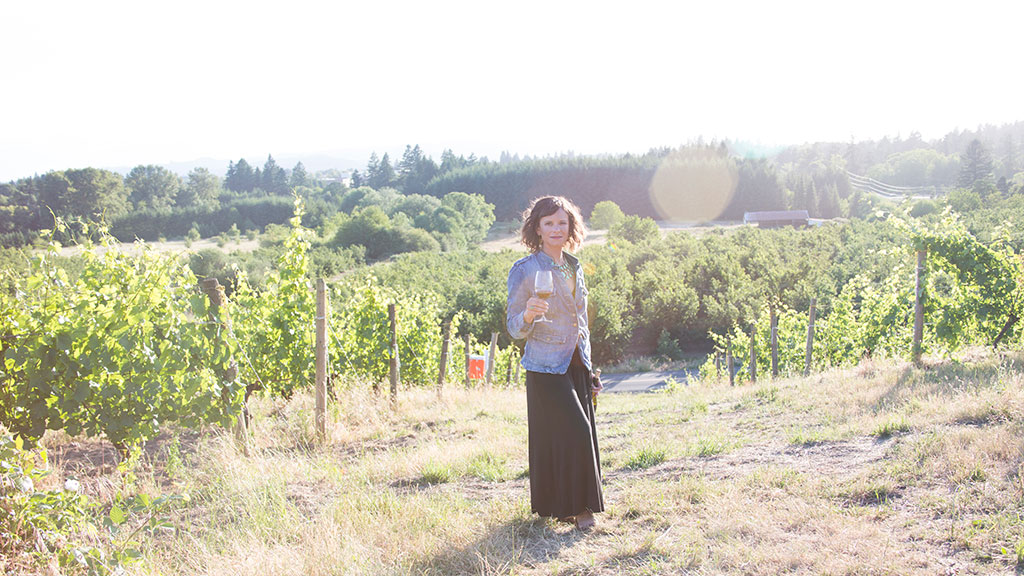 Cristina Gonzales is the granddaughter of migrant farm workers from Texas who moved to Wisconsin in search of a better life. In 2001, while backpacking through Argentina, Cristina fell in love with the grape, Malbec. She returned to the United States and spent a decade learning the craft through hands-on experience of internships and wine production positions around California, Oregon, Tasmania, and Australia.  In 2009, she moved back to Oregon and landed a position at REX HILL/A to Z Wineworks in the Willamette Valley.  It was here that Gonzales Wine Company was born.  Cristina founded Gonzales Wine Company in 2010 to celebrate the inspiration behind that first glass of Argentinian Malbec. Her approach to winemaking centers around an appreciation for the vineyard stewards tending the vines, respect for the land, a minimalist approach to creating big red wines and aromatic white wines, and the beauty of her Mexican heritage. She lives in Portland with her son Julian and their Blue Heeler, Bean. 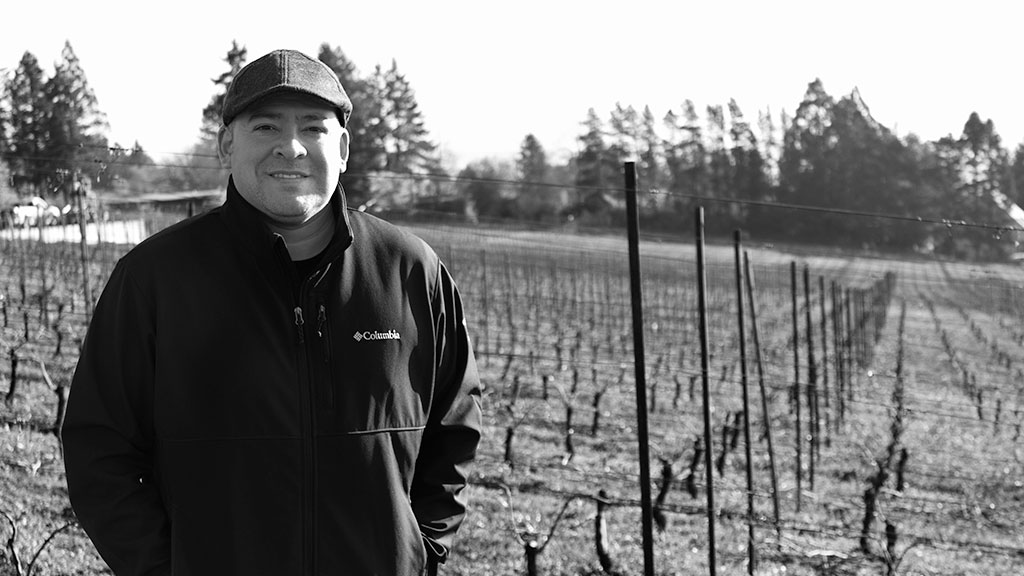 PARRA Wine Co was established in 2019 by proprietor Sam Parra. His last name is a Spanish and Portuguese surname meaning grapevine or trellis. Born and raised in St. Helena, CA, he was destined to be in the wine industry. After 15 years in the wine industry through Napa and Sonoma counties, he moved to the Willamette Valley in the summer of 2016. Through previous business trips Sam first visited this beautiful valley in 2000. PARRA Wine Co will remain a boutique, hand crafted wine producer. Over the years he has cultivated friendships with highly respected growers. Sam will showcase single vineyard wines from the great state of Oregon, SALUD!! 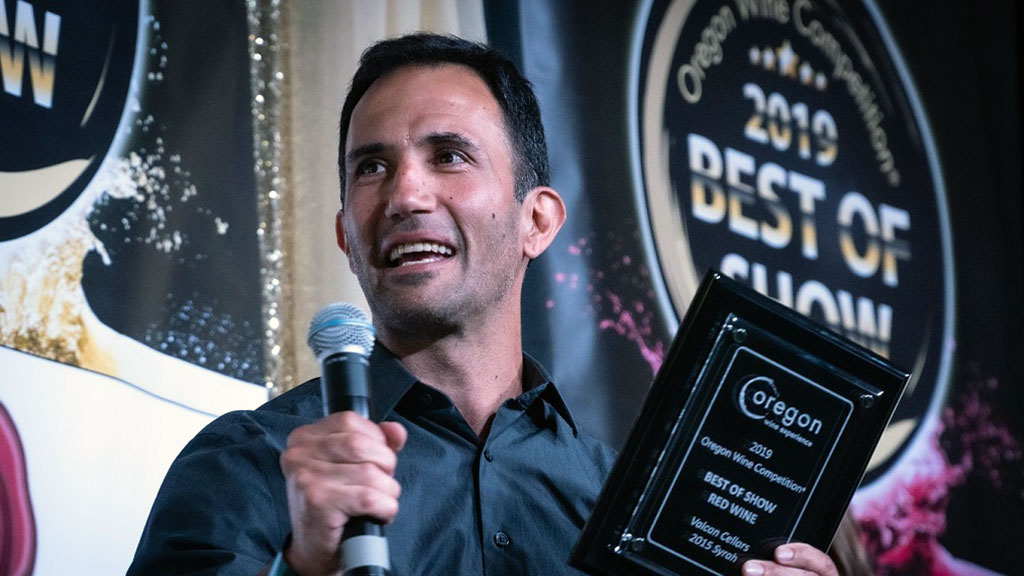 JP was born in Mendoza, Argentina, which is most known as Argentina’s wine country. JP comes from a multi-generational line of wine entrepreneurs. He completed a five year degree in agricultural sciences, with a focus in enology and viticulture at the National University of Cuyo in Mendoza, Argentina. In 2001, he came to Oregon looking for new challenges and attracted by Oregon’s growing wine industry. In 2002, he met his wife Doris and both decided to settle in Oregon.

JP has 19 years of experience in winemaking with vintages worked in Oregon and Argentina, including time at Willamette Valley Vineyards, Soter Vineyards, Dobbes Family Estate, Elizabeth Chambers Cellars and since 2018 as Head Winemaker for Silvan Ridge.

JP started his own project, Valcan Cellars, with his wife Doris back in 2012. Craving to grow his own grapes for Valcan Cellars, he took over Rainbow’s End Vineyard in 2013 and later in 2016, Mountain View Vineyard. Both vineyards are located in Monroe. Juan Pablo was appointed by the Governor to the Oregon Wine Board in 2012 and served as chairman of the Oregon Wine Standing Committee on Research until 2018. He is a well-rounded wine professional who understands Oregon's wine industry and the winemaking process from the vine to glass.

Celebrating Hispanic Roots was founded in 2020 by Atticus Wine Co-Owner and Winemaker Ximena Orrego partnering with an alliance of six Oregon winery owners and winemakers who share a Hispanic background, and have come together to celebrate Hispanic Heritage Month from Sept. 15 to Oct. 15 in order to share their stories, display the diversity of the Hispanic cultures which span most of Latin America and Spain, and as small business owners give back to the Spanish-speaking community in Oregon. Each of the wineries will be offering a special wine or wine selection to commemorate this event and 10% of sales will be donated to the Latino Partnership Program of the Oregon Community Foundation which funds efforts within education, leadership development and community bridge building that address social and economic issues within Oregon’s Latinx/o community. Visit the celebratinghispanicroots.com website or follow the event on Instagram @CelebratingHispanicRoots for additional updates and information.