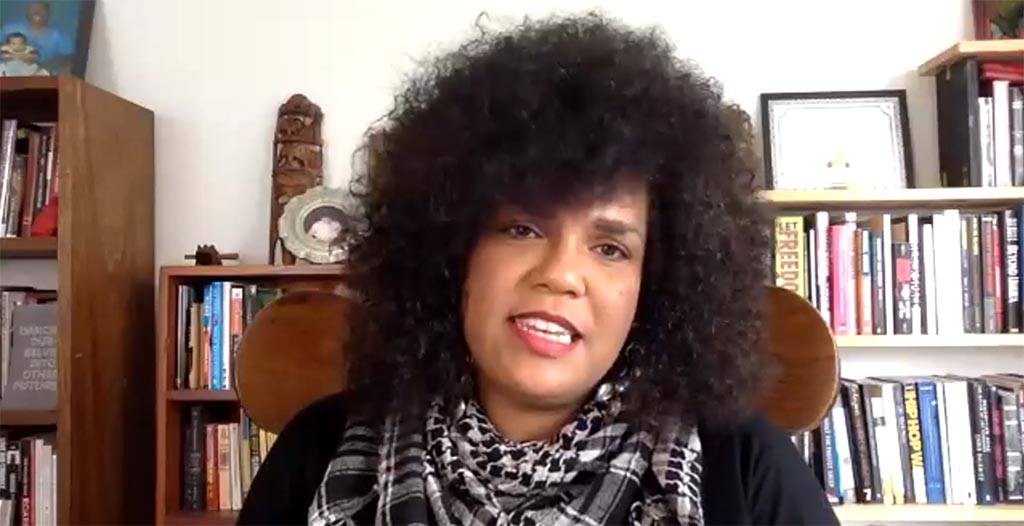 Walidah Imarisha, (pictured above), scholar, educator and author, exposed Oregon’s history of institutional racism and the strength of Black resilience.

“The fact that black communities exist in Oregon at all is incredible because we were not supposed to exist,” Walidah said.

Walidah shared Oregon’s long history of Black exclusion. Before statehood, the government gave away 2.5 million acres of land to white settlers only. In 1844, the territory criminalized black existence, and an exclusion included in the state constitution and not removed until 2002. In the mid-20th century, urban renewal projects and disinvestment fragmented the Black community in Portland’s Albina neighborhood, a process that continues today with late-state gentrification of the city’s historically Black neighborhoods.

Yet, Walidah showed, Black communities rose to meet these challenges. In 1867, when no schools in Salem would admit their children, the Black community raised funds to open their own school. Later the Black Panther Party operated a free dental clinic in Portland. In 1993 Brother To Brother, an organization created for and by Black gay men provided services for Black people living with HIV and AIDS.

To end structural racism, Walidah called for deep changes. “This is not something that can be solved with listening circles or with surface reform. This is something that has to be dug out from the root. I think this is the time for reckoning for white people to ask themselves, organizationally, institutionally, individually and collectively, do we want to be on the right side of history or not.”

Ann Curry-Stevens, Associate Professor, Faculty of Social Work at Wilfred Laurier University, was the principal investigator in a research partnership with the Coalition of Communities of Color. Ann highlighted findings from her work that led to the release of a report, “Communities of Color in Multnomah County: An Unsettling Profile” and a subsequent set of six community-specific reports that detail deep racial disparities across institutions and systems.

Across 28 data points, the data shows disparities experienced by people of color in Portland, mirroring national findings. “This report blows away the idea that Portland is an idyllic nook of the USA,” Ann said. “Institutional racism and its corollary of white privilege are firmly entrenched in the region.”

The report and parallel research show that culturally-specific organizations are well equipped to solve problems and have good outcomes. As an example, Ann shared how Self Enhancement Inc., which serves primarily African Americans, ran its own school and had a graduation rate of 98% while Portland public schools’ rate was 70%. The organization later partnered with a cluster of Jefferson High School students, taking the graduation rate of the cluster from 51% to 84% over six years.

The release of “Communities of Color in Multnomah County: An Unsettling Profile” led to reforms by policymakers and in philanthropy. Funders like Meyer Memorial Trust revamped grantmaking initiatives to focus on racial equity. Multnomah County’s anti-poverty work more than doubled investments in culturally-specific organizations.

In closing, Ann offered that funders should look beyond small interventions. “We need to resource these community organizations so that they're well stabilized to support the vitality of our communities,” she said.

Black organizations are chronically underfunded, Eric said, citing a 2019 report by the Association of Black Foundation Executives. The report showed that 60% of surveyed Black organizations had budgets of half a million dollars or less, and just 23% had reserves of three months or more.

He noted the impact of COVID-19, which disproportionately affects people of color, coupled with the Black Lives Matter movement for racial justice, creates an opportunity for philanthropy unseen in recent decades.

“In the 1960s civil rights movement, what would we have done as philanthropists? We no longer have to wonder,” Eric said.

Reminding donors of the power imbalance associated with funding nonprofits, Eric called on donors to look beyond funding innovative new programs and instead give operating support to help struggling organizations continue to provide core services.

“When we get off this call, invest in Black-centered and Black-led organizations. That means deep, multi-year funding invested in black leaders at all levels, to stop the brain drain of amazing black leadership that is leaving Oregon because they can't afford to run their nonprofits here.”

Eric noted that Oregon can overcome its past to become a national model for equitable philanthropy. “It doesn't have to be a history of missteps and missed opportunity. The choice is up to each of us as philanthropists,” Eric said. “Are we willing to understand this is our opportunity to make history? It not only benefits black Oregon it benefits all organizations. That's the work ahead of us.”