A Look at Oregonians ‘Walking the Tightrope’

The media is abuzz with the release of the new book “Tightrope: Americans Reaching for Hope” by Pulitzer Prize-winning authors Nicholas Kristof and Sheryl WuDunn for good reason. 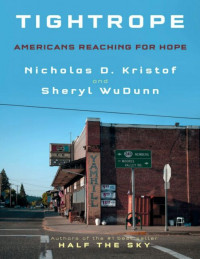 Their stories chronicling the devastation of America’s working class, framed by the experiences of the authors’ own friends in Yamhill County, Oregon, where Nicholas was raised, are downright gut-wrenching. The messages of "Tightrope" are a powerful call to arms that Americans must do more to lift up our fallen neighbors.

A handful of OCF staff members joined standing-room only audiences in Portland and McMinnville on February 6 and 7 to hear from the authors first-hand accounts of childhood friends and neighbors.

The authors painted a picture of a working-class hit hard by social and economic changes. As good paying blue collar jobs became scarce, rates of underemployment, incarceration, depression and opioid addiction soared. Sheryl noted that today, the zip code of a child’s birth is a good prediction of that child’s life outcome, revealing what we here at OCF refer to as the opportunity gap – when children from low-income families, communities of color, and rural areas simply do not have the same possibilities – at home, in school, or in their communities – that other Oregonians do.

Nicholas shared tales about kids he rode with on the Number 6 school bus in Yamhill who are today are dead, incarcerated, homeless or affected by serious illness. After childhood their trajectories diverged. Nicholas went on to study at Harvard and become a globe-traveling journalist, while many who stayed in Yamhill struggled.

Nicholas shared a photo of his childhood friend Mike, who is homeless and lives in a park. He asked the audience to realize that Mike was once a charismatic child who seemed to have a bright future.

A particularly moving photo of an elderly Dee Knapp kneeling at the graves of 4 of her 5 children – all of whom Nicholas knew – illustrate the dramatic divergence in outcomes. Two died in tragic accidents. Two others died from complications from drug abuse. The remaining child suffers from HIV and hepatitis.

Sheryl shared a more hopeful Oregon story. In Ashland, a talented high school senior wasn’t planning to go to college because her working class family couldn’t afford it. Neither of her parents had been to college. But a teacher insisted the student apply. Because of the teacher’s intervention, she received a scholarship to study journalism at the University of Oregon. Her name? Anne Curry, former anchor for the Today show on NBC.

Nicholas and Sheryl ask those gathered to consider social interventions to help those in need, especially the very young, who didn’t choose the circumstances of their births. Help them with early childhood education and universal healthcare. Help their parents with vocational training and drug treatment programs and everyone will benefit.

“We know what to do. We know what works,” Nicholas said. “These are choices we make as a society. That’s the debate we hope that ‘Tightrope’ will help inform.”

Oregon Community Foundation explores the opportunity gap in Oregon in our series of Tracking Oregon’s Progress (TOP) Reports. The 2020 edition, "Cornertones: Economic Mobility and Belonging in Oregon" examines differences in opportunities among Oregon communities. Adopting the opportunity gap lens provides an organizing framework for our existing work and a focus for new programs and initiatives going forward.