Opportunity Insights (OI) used data from the Opportunity Atlas* to identify high- and low-opportunity communities in Oregon. They limited their analysis to census tracts (geographic areas defined by the U.S. Census Bureau that contain about 4,000 people) with 2015 poverty rates above 10% and more than 100 people in the Opportunity Atlas data.

OI then created pairs of geographically adjacent tracts and labeled them with the associated municipality. For each pair, they computed the average adult household income for children who grew up in low-income families (listed as “household income” in the Opportunity Atlas). OI then ranked the tracts using this income average.

Last, OI verified that outcomes in each tract were relatively stable between the cohort depicted in the Opportunity Atlas (birth years 1978–1983) and a more recent cohort (1984–1988). OI provided OCF with statewide, urban, rural and Metropolitan Portland lists of ranked clusters.

OI repeated the same analysis for specific racial and ethnic groups. Due to limited data, they were only able to produce a list of three clusters that had better than expected outcomes for Latino children.

The following section outlines the geographic details of communities referenced in this report.

Drawing on OCF staff knowledge of Oregon and specific communities, OCF researchers selected four communities to study further. OI advised OCF that the clusters could be used as a starting point and combined with local knowledge to define exact geographic areas to study. As a result, Wallowa County was studied as a whole, excluding the tract in Union County, and Lakeview was studied instead of the entirety of Lake County.

For each profile, OCF researchers interviewed individuals who live and/or work in the area and reviewed existing data, reports, newspaper articles and other information sources. The initial list of interviewees was based on OCF staff knowledge and recent grant recipients. Additional interview subjects were identified through referrals from the initial interviewees.

In total, 34 interviews were completed across the four communities. Semi-structured interviews lasting approximately one hour were conducted by phone or in person. All interviewees were given the opportunity to provide feedback on their respective community profiles.

Researchers had the additional opportunity to conduct a focus group in Wallowa County. Five parents who currently live in the county participated in a conversation about their experiences in the community. OCF partnered with Building Healthy Families (BHF) to conduct this focus group. BHF staff recruited participants, provided child care and hosted the focus group at their location. In recognition of this support, OCF provided BHF with a $1,000 honorarium.

*For more information on the Opportunity Atlas and the methodology behind it, see https://opportunityinsights.org/ wp-content/uploads/2018/10/atlas_paper.pdf. 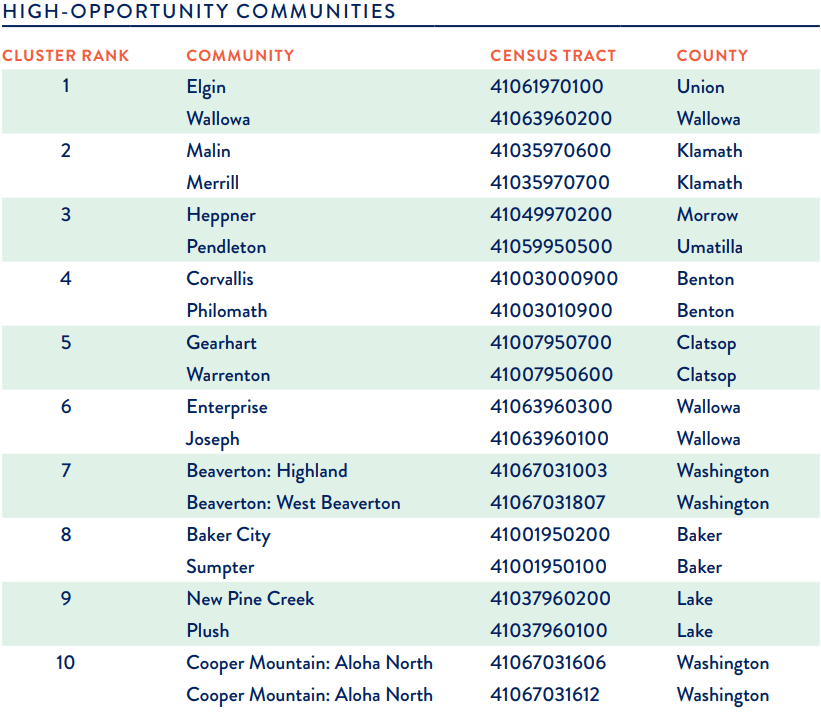