Most Americans believe that if people work hard, they will prosper. But a growing body of research makes the case that economic success is largely determined by family circumstances, neighborhoods, educational experiences, and race/ethnicity rather than by diligence and determination. Furthermore, it is becoming harder and harder to get ahead.

For the first time in U.S. history, young adults are less likely to earn more than their parents. Children of color and children raised in low-income families are even less likely to move up the income ladder.

Since OCF published Toward a Thriving Future, our 2017 report about Oregon’s opportunity gap, more national research has shown the importance of place in shaping economic mobility. This report combines groundbreaking analysis from Opportunity Insights (OI), a group of researchers and policy analysts based at Harvard University, with original research conducted by OCF to describe where in Oregon children have the best chance of escaping poverty, and why.

OI’s research provides a new understanding of the conditions that help or hinder economic mobility. Children who grew up just a few miles apart in families with similar incomes can experience vastly different outcomes. Economic and racial integration of neighborhoods, levels of social capital, employment rates and school quality help explain the differences seen across geographies.

Children from low-income families who grow up in economically and racially integrated communities are more likely to escape poverty in adulthood.

Growing up in a neighborhood with high poverty rates amplifies the effects of poverty, undermining children’s ability to mitigate toxic stress and other negative effects of adversity.

In Oregon, 57,000 children live in communities with a poverty rate above 30%. Children of color are far more likely to live in high-poverty areas as a result of racial segregation of neighborhoods caused by discriminatory policies, practices and institutions. Although many of these policies and practices have officially ended, their legacy — along with continued discrimination — shape neighborhood demographics and individual opportunity today.

Oregon’s housing crisis also limits opportunity. In many parts of our state, housing production has not kept pace with population growth. The combination of the housing shortage and slow wage growth has resulted in 70% of low income children living in households that spend 30% or more of their income on housing costs. Families burdened with high housing costs are more likely to face housing instability and are at a higher risk of becoming homeless. Low-income rural households face economic and housing instability that translates into high residential mobility, with families often moving to other high-poverty communities.

Social capital is a conduit for opportunity.

Community relationships and networks create a sense of belonging where residents feel welcome and valued. Strong social ties help individuals and families access necessary support, from emergency funds to child care and job leads. When networks include members with power, people’s voices are more likely to be heard, and their neighborhoods are more likely to have quality services and amenities.

While state measures of social capital are generally high, connection, trust and civic engagement are not experienced in the same way by all Oregonians. Formal measures of civic engagement like voting and volunteering are correlated with education, income and race. People who have connections to community leaders are also more likely to be wealthier and better educated compared to those who don’t.

The timber industry’s decline dramatically shifted rural Oregon’s employment landscape. Although some communities are thriving, many are still struggling to redefine economic vitality. People in high-poverty rural and urban communities often lack access to stable and living-wage jobs due to social isolation, lack of education and training, or lack of physical access. Almost 500,000 Oregonians 25 and older make less than $15 an hour or are unemployed. Middle-skill jobs that require more than a high school diploma but less than a bachelor’s degree have the most openings, partly because there are not enough qualified workers.

OI researchers found that school quality is responsible for about half of economic mobility differences across neighborhoods in the same county. Funding disparities account for some differences in quality across schools and districts. In fact, increases in per-student spending result in more educational attainment, higher earnings and lower adult poverty rates for low-income students.

While Oregon contributes about 66% of total school funds and has attempted to make the funding more equitable, roughly 20% of low-income students attend inequitably funded schools.

Isolation and distance are additional barriers. Rural Oregon schools have higher rates of chronic absenteeism, which likely relates to poverty, transportation challenges and the need to travel for services like health care. Also, rural students are more likely to live farther from postsecondary opportunities, which limits their exposure to higher education and creates challenges for those with obligations that restrict their ability to move away for school.

OI used their data to identify the Oregon communities where children were most and least likely to escape intergenerational poverty. OCF conducted additional data analysis, interviewed residents, and reviewed reports and news articles in four high opportunity communities where children in low income families had greater economic mobility: Beaverton, Bend, Lakeview and Wallowa County. While it is impossible to conclusively determine why outcomes are better for low-income children in these communities, OCF’s research highlights likely contributors and obstacles to mobility

Most (7 in 10) of the high-opportunity communities are in rural areas.

No single defining feature or data point describes why these communities demonstrated better outcomes for low-income children. Rather, each area has a unique mix of characteristics that bolster opportunity. For example, strong social ties in Wallowa County result in support for children and struggling families. This culture of service is deeply ingrained in the fabric of the community. On the other hand, in Lakeview, generous place-based scholarships have contributed to a strong college-going culture and made it possible for lower-income students to earn postsecondary degrees.

While these rural communities shared few defining characteristics, high-opportunity urban areas did share some characteristics. In contrast to low-opportunity urban areas, they have higher incomes, stronger employment rates and better schools. Beaverton exemplifies the relationship between these three factors: Residents, many of whom are more educated than Oregonians on average, have high expectations for education and have shown support by passing most of the bonds and levies proposed over the last decade to provide additional funding for the school district. Beaverton residents have found other ways to support their schools. Beaverton High School, located in the high-opportunity area, has a higher student population in poverty than most area schools, but it recently established a separate nonprofit that raised $5 million in just six years. Most of the funds came from successful alumni.

Higher mean incomes and lower poverty rates are also signs that high-opportunity urban areas are more integrated. In Bend, high-opportunity neighborhoods are notable because they are more economically and racially integrated than surrounding areas. The city is often described as having an economic, racial and political east-west divide, but the opportunity-rich areas of the Orchard District and Mountain View appear to break that mold. At the same time, the city is one of Oregon’s fastest-growing places, resulting in rising home prices and increasing concerns about affordability. In response, Bend is ahead of the curve in changing local laws and regulations to encourage more affordable housing. As an example, the city eliminated single-family zoning before the change was codified in state law.

All five low-opportunity communities are in urban areas along the I-5 corridor.

Children who grew up in low-income families in these areas had the lowest average incomes in the state compared to children growing up in similar circumstances. Low-opportunity areas have higher poverty rates and higher percentages of communities of color compared to high-opportunity communities. These neighborhoods demonstrate the impact of Oregon’s discriminatory policies, practices and institutions. Documenting efforts in these low-opportunity communities to overcome the effects of bias and discrimination was outside the scope of this report, but Beaverton and Bend provide some examples of promoting equity and belonging. Through its actions and words, the city of Beaverton has demonstrated its commitment to creating a welcoming city for immigrants, refugees and communities of color. In Bend, organizations, schools and residents have come together to improve education outcomes for students of color, especially the region’s growing population of Latino students. 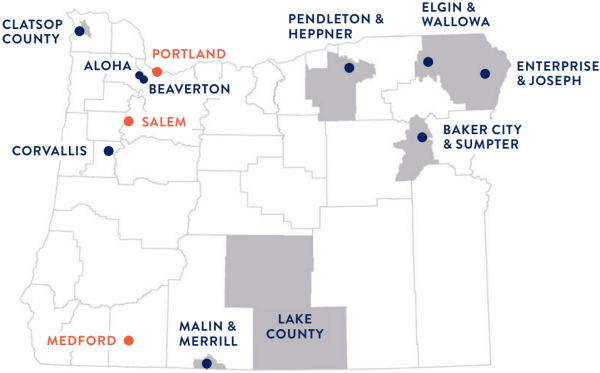 Closing the opportunity gap requires us to address the systems, networks, institutions and values that make up our communities. The data and examples in this report highlight ways to build opportunity-rich neighborhoods and communities for children of color, low-income children and rural children.

There is no one-size-fits-all approach to strengthening economic mobility. Building a brighter future for our children involves tailored approaches that take into account each community’s unique mix of assets and opportunities. By combining local solutions with policy and systems changes that dismantle barriers to opportunity, we can achieve a truly thriving Oregon.

“Our existing systems distribute opportunity based on income, class status, race, and ethnicity rather than hard work and talent.”

Next: What Matters for Opportunity »