Transformed by My Trauma 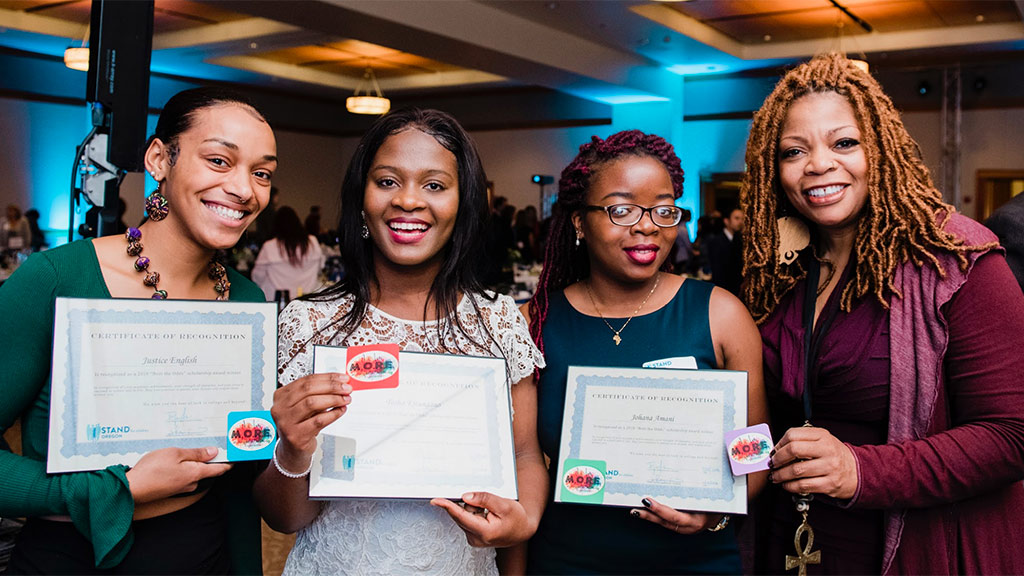 These are the co-founders of I Am M.O.R.E. (Making Ourselves Resilient Everyday), an inaugural member of the Oregon Black Student Success Community Network, as they celebrate the three $16,000 Beat The Odds scholarship awards from Stand For Children. Pictured (l to r) are Justice English, Jeanette Mmunga, Johana Amani and S. Renee Mitchell.

I secretly despised my mother for most of my life.

It took me a while to be honest about that, as she is so beloved as a community servant. What I can also admit now is that I am divinely grateful for enduring a childhood that made me feel so deeply unloved. From decades of wading through heartbreak, and losing sight of my self-worth, I have come to realize that encounters with trauma can eventually serve as signposts on the way to one’s becoming. Researchers call this phenomenon post-traumatic growth.

My decades of internal suffering led to me becoming a spoken-word poet and artist, because creativity helped me process my experiences. It guided me toward co-founding Healing Roots, a culturally specific, domestic violence resource program in North Portland. And it also steered me toward co-creating I Am M.O.R.E. (Making Ourselves Resilient Everyday) with three, young and dynamic Black girls - Justice English, Johana Amani and Jeanette Mmunga.

Now college students, they were once members of my Black Girl Magic Club at Roosevelt High School in North Portland, where, for years, I was the only Black teacher. My youth co-founders were also three of the four Portland-based recipients of Stand For Children’s $16,000 Beat the Odds scholarship. Within less than a year, with support from Stand, Portland Public Schools and other partners, we took that seed of an achievement and lovingly blossomed it into a nationally award-winning initiative that helps youth of color heal from their anguish, find their sense of purpose and emerge toward empowered resilience.

I couldn’t have accomplished these successes without first wearily traveling down an unsympathetic road that, at times, sucked the life from me. I kept replicating my same dysfunctional fears of unworthiness by overaccommodating and trying to earn love from others, when I didn’t even know how to love and accept myself. So, it is no surprise that I ended up repeating familiar patterns within a verbally and emotionally abusive marriage that nearly sent me tumbling into a nervous breakdown.

About two years after that relationship ended, I discovered Ruth King’s book “Healing Rage: Making Inner Peace Possible.” From her writing, I recognized that I had been unknowingly disguising my rage as devotion. I was a fiercely loyal, sacrificial giver who believed I could earn my significance by pleasing other people. Yet, the only rewards I received were self-devaluation, self-reproach, and shame.

Still, for decades, I kept participating in a transactional form of love. I never figured out how to earn approval from the people closest to me, so, I believed I didn’t deserve it. Yet, I repeatedly tried to obtain it by being over-accommodating, self-sacrificing, and academically smart. I never allowed myself to trust kindness, tenderness, or undeserved praise.

Later, I realized that my go-to trauma response, over other natural reactions of fight, flight or fiddle about, was to freeze. Whenever I felt threatened, I’d stay quiet, trying to quell the hurricane tumbling through my psyche, and then I’d go write a poem, read a book, or organize my closet. People often interpreted my introverted mannerisms as shyness. So, I was an easy target for bullying, in and out of my home, from the time I was a young child to several years after I ended my 25-year career as a newspaper journalist in 2009.

Being an award-winning Metro columnist at The Oregonian led people to believe that I had it all together. No one seemed to grasp how truly sad and lonely I really felt, or how inadequately prepared I was to raise three children to become emotionally whole adults. It wasn’t until I enrolled in graduate school a few years ago to pursue my doctorate degree at the University of Oregon that I took a creative writing class that inspired me to unpack my limiting, self-loathing beliefs. I set an intention to start unraveling all the ugly, unkept edges I kept burying under martyrdom.

Through authentic storytelling, I was able to yank up roots of needing another’s endorsement. And, for the first time in my life, I experienced what it meant to be deeply loved – for and by myself. Eventually, I understood that my estranged mother, ex-husbands, former friends and various other dysfunctional affiliations had all collectively given me the best gift I could have ever received. They finally forced me look within to find what I needed most.

I am so thankful for completing that rite of passage. Now, I help young people of color to become researchers of their own lives; to not just tell their story, but to own their story. I Am M.O.R.E. programming gives them excavation tools to uncover the lessons, gifts of wisdom and hidden strengths crusted over by trauma, remorse and internalized voicelessness. They begin to recognize, as I did, that there is nothing so liberating as opening up a buried part of your woundedness, bringing it into the healing light of day and reclaiming it as insight.

“Now, I can forgive myself and others,” said Oscar Luna, a tall and caring Latinx college student who hasn’t seen his biological father in over 12 years. “Forgiveness is something huge that I honestly couldn’t express at all. I typically don’t forgive others. My head was always telling me: ‘You should never forgive them.’ But, I Am M.O.R.E. opened up my heart.”

This self-discovery process through critical and reflective meaning making is how I Am M.O.R.E. delivers social-emotional leaning (SEL) skill building. A feel-good, add-on SEL curriculum is not enough to serve Black children whom society targets, overlooks and dismisses from the time they are born. Our evidence-based approach is why we earned an SEL Innovation Award from the NoVo Foundation before we had been operating even a full year. It’s why we were mentioned in a Stanford University Social Innovation Review article as an example of how to empower young people from the inside out.

Culturally nurturing adults are the guides on this journey, the encouragers and the metaphorical wells of profound love. We recognize the familiar scars for what they are, the residue of being born Black, and residing in America. As the late author James Baldwin wrote: “A child cannot be taught by anyone who despises him.” I Am M.O.R.E. is the counternarrative of saviorism. Never are our grownups the heroes of young people’s stories. Young people need to become their own heroes, just as I have learned how to become mine.

“I Am M.O.R.E., honestly, has given me a voice, a voice that I lost or didn’t even recognize that I had,” noted Jeanette, an African refugee, and one of our youth co-founders. “It opened me up to a better version of myself. I have always been outspoken, but it’s different. It’s more like I speak because I now know who I am.”

I feel so fortunate to be doing this transformational, youth-development work. But, it took a decades-long pilgrimage of rambling through life wanting desperately to belong, while clinging anxiously to loneliness because that’s what was most familiar. I recognize this quandary in other children as clearly as day. But, each individual expresses hidden rage differently, perhaps as indifference, intolerance or manipulation; or self-abuse, self-indulgence or self-sabotage. I Am M.O.R.E. views each of these caustic actions as encryptions pleading to be noticed, exhumed and reclaimed as energy that fuels a child’s life calling.

We provide young people of color with opportunities to discover that they are so much more than the worst thing that has ever happened to them. Once they discover that for themselves, they effortlessly give themselves permission to rev up their intrinsic motivation, shift toward resiliency, and, then, look for ways to inspire and empower others. We call this journey: “the theory of empowered resilience.” We even made it into a theme song: “When I am in my power, I empower.”

Today, I no longer lug around hidden rage. Certainly, my once-merciless motivation to earn my own value led to a fulfilling journalism career, including two nominations for the prestigious Pulitzer Prize. I’ve also been repeatedly recognized for community service, including a 2019 Spirit of Portland Award, nominated by the late City Commissioner Nick Fish. But, what I consider as my life’s greatest accomplishment is finally recognizing how my deep, lifelong woundedness guided me toward a path of unconditional self-love, which then led to the realization that truly—unquestionably—I am MORE.

Volunteering in Oregon: Strengths and Opportunities in the Nonprofit Sector