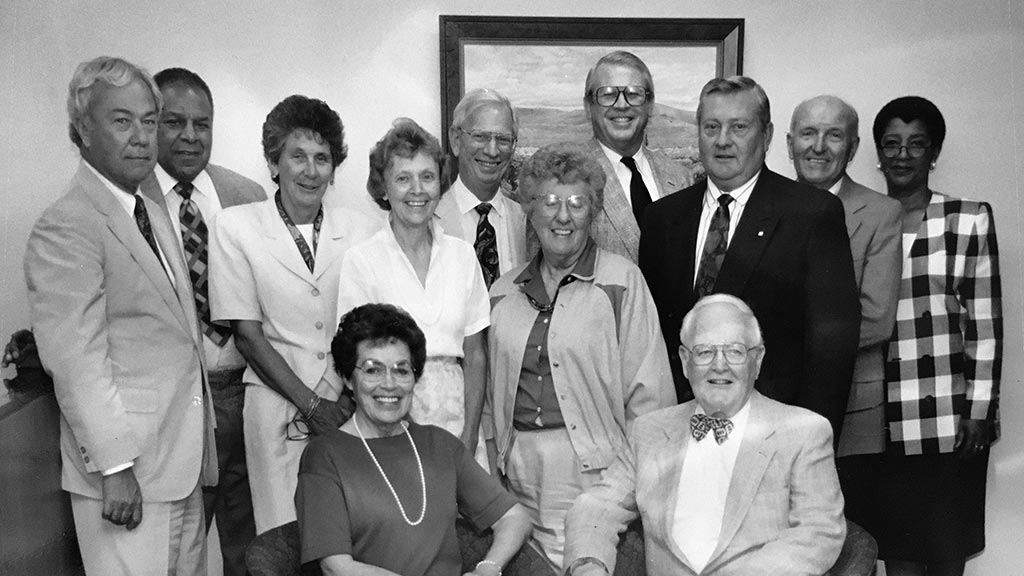 Born from timber money in the early 1970s and resolutely statewide in focus, Oregon Community Foundation was the product of an iconic, innovative time in state history.

Oregonians throughout the state were inspired by Governor Tom McCall, a Republican, who rallied them around a common cause: Protecting the state’s natural beauty and livability. By 1973, the Legislature had passed laws to secure public ownership of beaches, promote recycling and conservation, and create a land use system to manage increasing growth. These developments attracted a new level of national attention to Oregon and made it a leader among states.

Oregon fifty years ago was a different place in many respects: Timber and agriculture still dominated the state’s economy and fueled its cities. As a result, prosperity and influence were more balanced between rural and urban areas. Home to fewer than half as many people as today, the state was also less diverse and inclusive, and Oregonians — broadly speaking — were less alert to the inequities and differences that divided them.

Certainly there were plenty of Oregonians, namely people of color and women, who were shut out of the success and optimism of those years. Yet on several fronts, they have largely been viewed as a stimulating period of growth, opportunity, and concern for the collective good.

“Oregon in the ‘70s was having a remarkable renaissance. There was a civic upwelling happening,” says Max Williams, OCF’s President and CEO from 2012 to 2022, who previously served in the Oregon Legislature.

“You could see it in the nonprofit organizations that were being formed to serve people: Oregon Community Foundation, Bradley Angle (first domestic violence shelter on the West Coast), and Open School were just a few of them. And you could see it in the policies that the state was operating under. While there were still political disagreements, there was also a sense of unity and acceptance of good ideas on their own merit, not quite so much around what party they were coming from.”

Much has changed in Oregon since the 1970s — but not OCF’s founding vision. For 50 years, OCF has brought people together to improve lives for all Oregonians, and its impact continues to grow.

Oregon’s largest charitable organization, which has distributed more than $2 billion over the past five decades, exists largely because of one man — and a woman who gave him the idea.

Bill Swindells Sr. was a famously no-nonsense timber industry titan, known for his business savvy and forceful demeanor. During his tenure as president and chairman of the board of Willamette Industries, he grew a family-owned operation of three sawmills and 400 employees into an integrated forest products company that employed 7,300 people with 51 plants in 10 states.

By 1973, Swindells was nearing retirement and looking for a new outlet for his get-it-done diligence and drive. 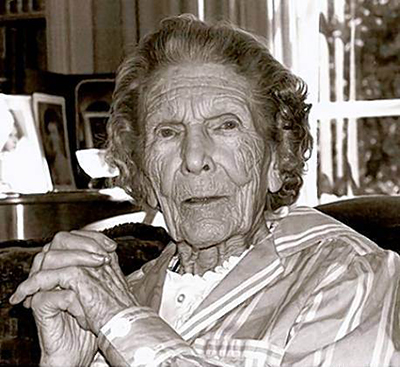 His wife’s sister, Jean Gerlinger Doyle, had been involved in community foundations in northern California. She knew from experience that community foundations enabled donors to make a greater impact by pooling their wealth under shared management, while still retaining their individual giving priorities. Community foundations, unlike private ones, also seek to inspire more people to give, by educating donors and making it easy for them to support the causes and organizations they care about.

Gerlinger suggested to her brother-in-law “that he ought to have a (community) foundation in Oregon,” said Ned Look, OCF’s first paid executive director.

Swindells “took it from there and decided that it ought to be statewide — not just Portland, which was the best decision we made.”

While unusual, the decision to create a statewide community foundation, rather than a private family foundation or one that focused on a specific city or region, came naturally to Swindells, says his grandson, Bill R. Swindells.

“My grandfather and father (Bill Swindells Jr.) were always externally focused in their leadership and in their wealth distribution. They felt very strongly that the point of the money is not to enrich your family and not to enrich yourself,” he says.

“The family business started in Dallas, Oregon. We had significant operations around Lebanon, Bend, Sweet Home, and Springfield, so they really saw the foundation as serving all of those communities, as opposed to just Portland or just what one family’s interests were.”

To OCF’s founder, a statewide focus also made good business sense. By drawing wealth from all parts of Oregon under one administrative structure, the new foundation could make a bigger impact, more efficiently.

Leaders from across Oregon

Swindells’ statewide vision was evident in the people he recruited to help shape and lead OCF, including Otto J. Frohnmayer, a prominent attorney in Medford, and Stafford Hansell, a hog farmer and state legislator from Umatilla County.

“Bill Swindells could have picked a dozen people from the Portland area to come on the team. It could have been the ‘Portland Community Foundation’ or the ‘Multnomah Community Foundation.’ But he didn’t choose to do that. It was an intentional choice to make it statewide, and that makes us unique,” Williams says.

Early board leadership brought together people who had already worked together in business or other settings and had served in leadership roles in their communities or at a statewide level. Frohnmayer and Hansell joined seven other men and one woman to form the first OCF board, a makeup that typified many organizations in the early 1970s.

Over the years, as Oregon’s demographics shifted, the OCF board evolved to reflect the communities that OCF serves. Today, a majority of board members (eight of 15) are women, and the group is more broadly representative of the state population.

Swindells was the first donor to OCF, giving $63,000 of his own money (about $438,000 in today’s dollars) to establish the foundation’s first fund. He then persuaded four large Portland-based banks to transfer several of the charitable trusts they held to OCF, jumpstarting the nascent foundation’s endowment.

The banks continued to receive a fee for serving as investment managers for the trusts, while OCF took charge of distributing the earnings into the community. Funds from the trusts were largely discretionary, meaning OCF board members could decide how to disperse them. These factors enabled the board to quickly begin making grants to nonprofits of its choosing — giving OCF instant standing in philanthropic circles. (In time, OCF would assume all duties related to the trusts, ending the banks’ role.)

“The fact that they had money they could give out immediately made OCF different, right from the beginning. These were funds that the board could control, and that was big,” says Kathleen Cornett, OCF’s first vice president for grants and programs, who retired in 2019.

Despite all of the activity by influential state leaders to get OCF off the ground — and the transformative impact that OCF would have in Oregon communities over the decades that followed —  the new foundation began with little fanfare.

“The first couple of years, they made $500 or $1,000 grants to a handful of organizations. A few people would have cared and noticed, but not very many people were paying attention to it,” Williams says. 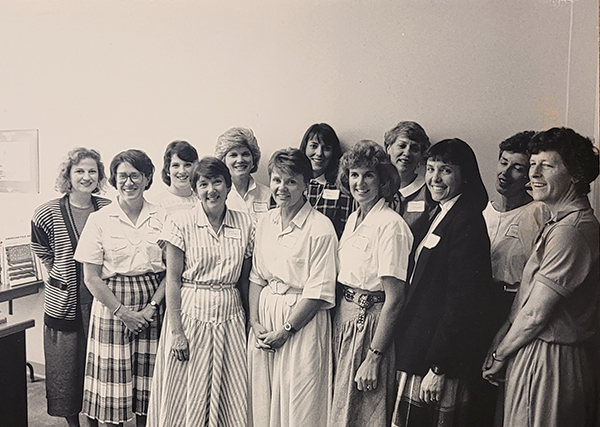 Today, OCF’s presence throughout Oregon is widely felt. But it took time to deliver on Swindells’ statewide vision. The effort picked up steam in the late 1980s under Greg Chaillé’s visionary leadership.

Chaillé, OCF’s chief executive officer from 1987 to 2011, and Cornett made it a priority to travel the state, meeting with nonprofits and community leaders and recruiting hundreds of volunteers, particularly in rural areas. They led the creation of a regional infrastructure that would grow to include five regional offices, eight regional leadership councils, and more than 1,800 local volunteers who fill key roles for OCF and advise the board on challenges and opportunities in their communities.

OCF’s current statewide reach would probably not surprise its early leaders. But other milestones might:

Although proud of their distinct regions and hometowns, Swindells and other early OCF leaders saw themselves foremost as Oregonians, says Williams, who studied OCF board minutes from the early 1970s to understand early board members’ hopes for the foundation.

That founding vision — to serve all of Oregon — remains intact, fifty years later. It makes OCF both rare and valuable, in the current era of increased divisions and less allegiance to a shared, state-based identity. It would be challenging, if not impossible, to create a similarly statewide organization today. 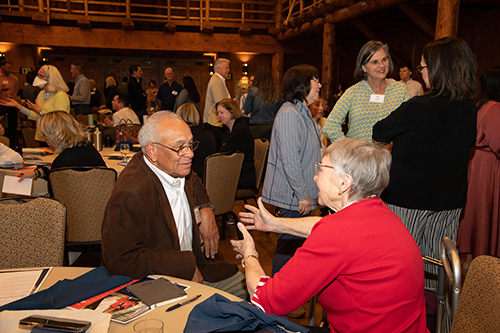 “OCF is maybe the last place in the state where you can get people who have wildly disparate points of view on politics, ideology and social issues gathered in the same room and unified around certain topics that they can use their philanthropy to help support. I don't know many other organizations that are able to do play that bridge-building role,” Williams says.

“The real lesson to me, in conversations with donors who hold very different opinions on lots of things, is that we shouldn’t be defining people by the edges of our individual policies and politics. Because Oregonians have these huge swaths in the middle where we agree,” he says.

“We all care about early childhood (for example). We all want schools to work. So let’s talk about those places where we find common ground, and work together on solutions. That’s what OCF does for Oregon, and that’s the magic of OCF.”

OCF was founded to improve the lives of all Oregonians through the power of philanthropy. Help us celebrate 50 years of Oregonians helping Oregonians.