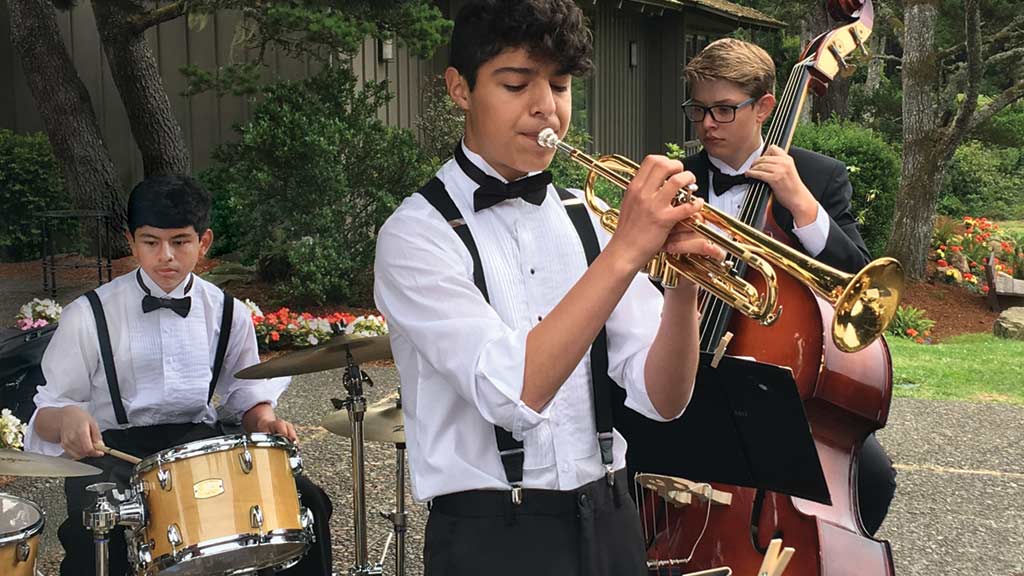 Expanding Opportunities for Students Through the Arts

“Music and art bring dignity to children and families and communities. They bring a feeling of tremendous pride and accomplishment.”

Board Chair, Music Is instrumental

“I have many friends in band, and we support and encourage each other,” says Taft High School student Sam Cortes. “It’s impacted me in a good way, because it’s helped me with my grades. I want to continue drumming and get a scholarship to play in college.”

Sam is one of more than 3,500 Lincoln City students who have benefited from mandatory music education. Six years ago, district elementary schools offered little or no music instruction. A grant from OCF’s Studio to School (S2S) Initiative supported music programs at both schools, including sixth–grade band.

“At the end of our first year, Principal Nick Lupo noticed that kids who volunteered for band scored higher in academics than kids who didn’t,” says Christine Tell, founding board member of Music is Instrumental.

Principal Lupo also recognized that the children who didn’t volunteer were those who typically face opportunity gaps. This led him to require sixth–grade band so that all students would have equal access. To reduce barriers for low–income youth, the schools created an instrument lending library. They also engaged retired musicians as mentors and teachers.

The S2S team founded Music is Instrumental (MII) to sustain programming beyond the Initiative. MII has garnered strong community support and received an additional OCF grant to expand into Waldport.

That’s just one example of the S2S Initiative’s impact. This $6M, five–year effort to increase arts opportunities for students of color, rural students and low–income students has brought nonprofits, schools and teaching artists together to make high–quality arts programming more accessible, equitable and responsive to local interests and needs.

S2S projects have developed, expanded or improved arts programs across Oregon, including band and annual musical productions in La Pine, film production in Ashland, multimedia storytelling in Joseph, and a performing arts program in the Illinois River Valley that produces two original plays annually. In addition to specific art proficiencies, students gain cognitive, social and emotional skills that foster success in school and in life.

S2S has built a powerful network of arts education champions and generated seven principles for implementing high–quality arts education. Now, OCF is using these resources to help other communities improve equity and quality in arts programs and to bolster support for statewide arts education.