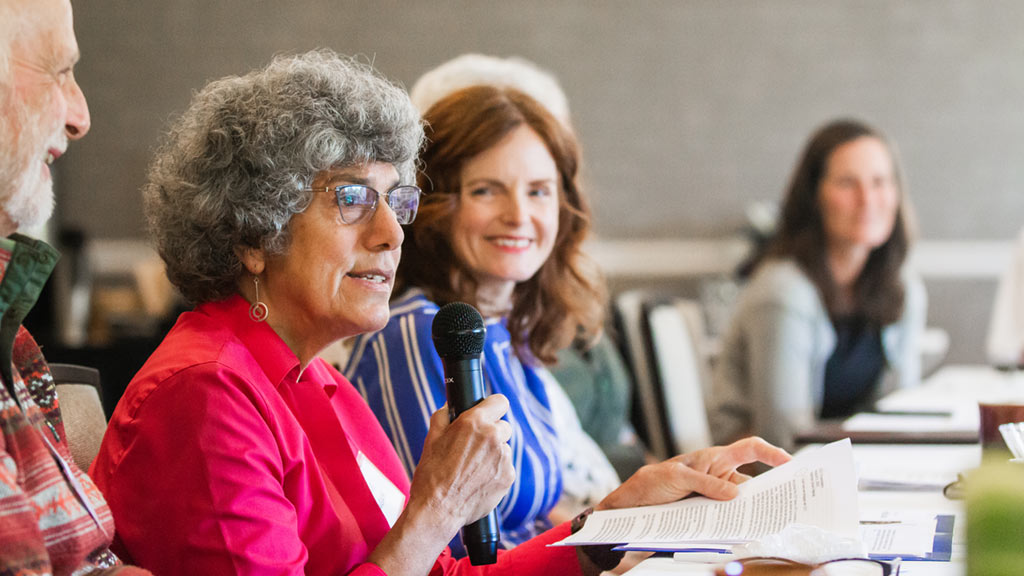 Bonnie Reagan tells her story at the OCF August 2022 Board of Directors meeting. Photo by Zippy Etzel.

Meet Bonnie Reagan, M.D. — physician, founder of a kids’ after school music program, innovator and philanthropist. A lifelong volunteer with a passion for helping others, she enjoys her partnership in giving with OCF.

Through involvement with two OCF donor advised funds – one started by Bonnie with her husband and another by her brother – Bonnie supports organizations working to give people a leg up.

“I feel like I have teammates.” Bonnie says. “Working with OCF people has helped me to become very excited about lots of things. I feel I’m doing my part to help the community. There’s nothing better than that.” 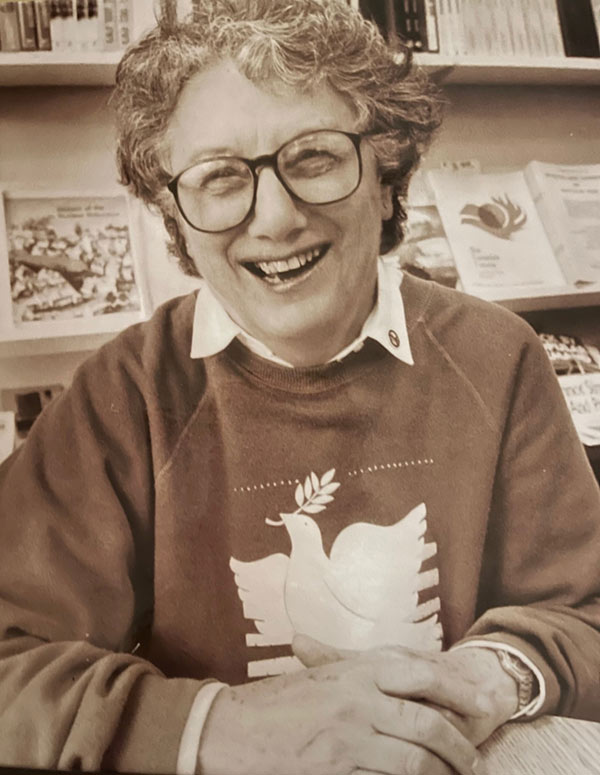 “Del Greenfield, my mom, lived life hugely and courageously, loved passionately, laughed often, worked like crazy and inspired hundreds of people. She is my hero and the reason I am who I am,” Bonnie says.

Del was the daughter of Ukrainian Jewish immigrants who came to Philadelphia in the early 1900s fleeing the pogroms. One of six children who lived hardscrabble lives, Del graduated high school at 15 and was too poor to attend college. When she married Bonnie’s father and had children, she took the role of parenting very seriously.

“My mom raised us to be informed and responsible citizens, to serve our community, to be open to learning, to be world citizens. She insisted we all go to college, and all three of us went beyond college.”

Del lived with cancer for nearly fifty years. “I rarely heard her complain or feel sorry for herself,” Bonnie says. “She was always looking forward to what she needed to do next. She was funny, creative, almost boisterous at times. Everyone knew her laugh.”

“When she was 91, still living with cancer, and my dad having just died, she decided she didn’t want to live anymore and looked into the Oregon Death with Dignity Act. She told us she didn’t have time for that — at that time there was a two-week waiting period — so she chose to quietly end her life by stopping eating and drinking,” Bonnie recalls. “She died in five days, after telling lots of jokes and telling us all how important we were to her. She was a model for us in life and in death.”

Given her mother’s example, it’s no surprise that Bonnie took up causes from an early age. Bonnie started giving to UNICEF in high school, and pursued subsequent careers in high school teaching, pediatric nursing and a 22-year family medicine practice, all with the aim to help others. She was named Oregon Family Physician of the Year by Oregon Academy of Family Physicians and led the creation of a guide for health care professionals to the Death with Dignity Act that Oregon enacted in 1997.

A commitment to music and learning

Music has always been important to Bonnie. Early in life she took piano lessons and performed in a school choir. As an adult, she sang for 20 years in Portland’s Choral Arts Ensemble. After retiring in 2009, she discovered the El Sistema music program in Venezuela, which provided music education mostly to poor children. After learning about the existence of El Sistema USA, which then had no presence in Oregon, she co-founded BRAVO Youth Orchestras, a member organization of El Sistema. She continues to serve as BRAVO’s board president today. 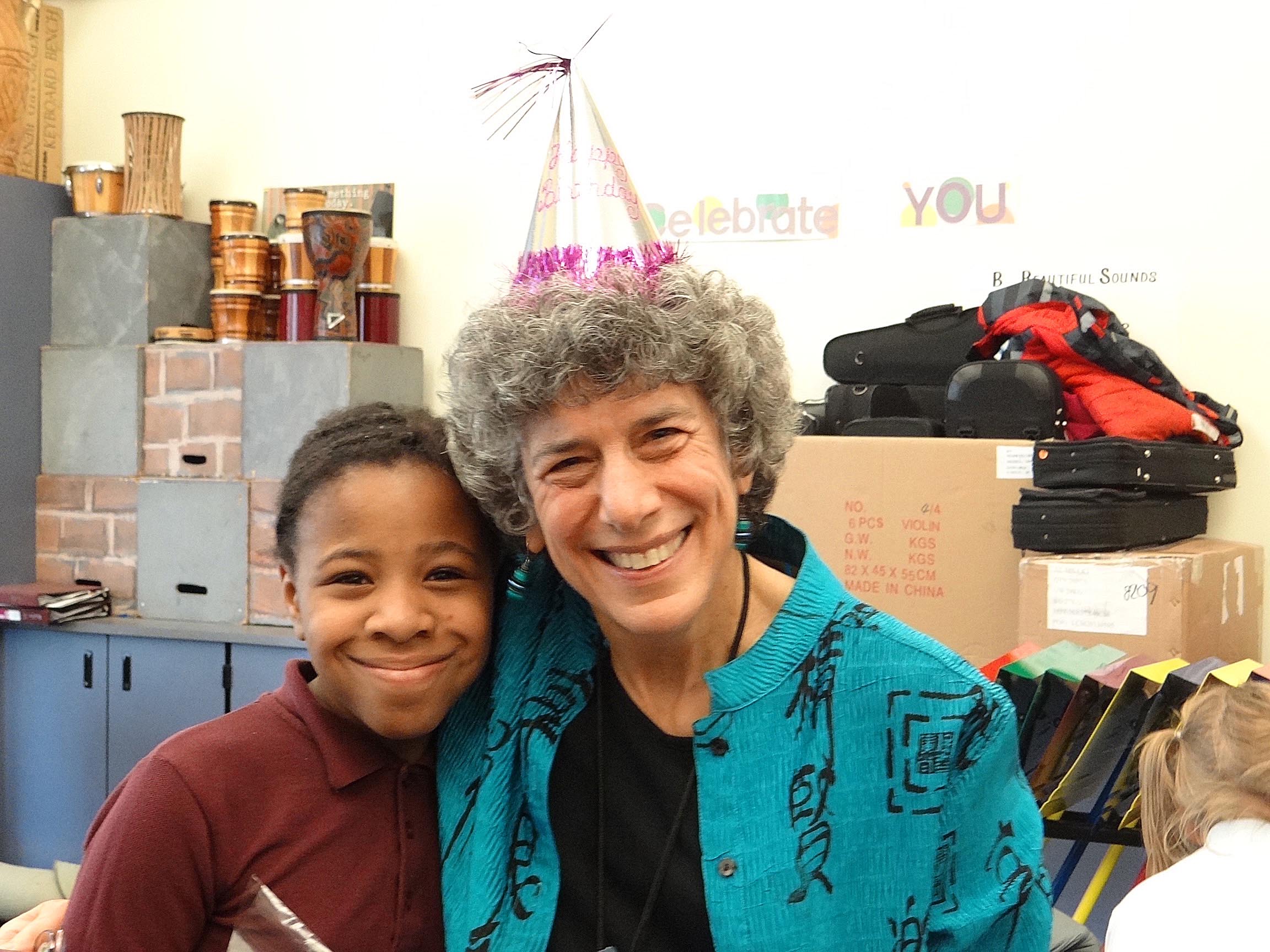 BRAVO Youth Orchestras provides instruments and rigorous training to Oregon children. Participating children practice up to 10 hours a week in after school programs, enjoy connections with guest artists, and perform in public. “These are amazing opportunities for young people to be involved, to learn skills, to work together as part of a group, and bring joy to people,” Bonnie says.

Involvement with BRAVO Youth Orchestras inspired Bonnie to explore new musical outlets. She took up violin lessons for the first time at age 69 and tried her hand at composing music at 74. BRAVO Youth Orchestras, conducted by an eighth-grade student, performed one of her original compositions, “Ionian Meadows.”

“All of us have talents and skills and interests that we don’t know about, or we haven’t been given the opportunity,” Bonnie says. “It’s really exciting to discover something about your self that you didn’t know. I think everybody has that ability. I’m a life-long learner, and that’s made me even more interested in helping others learn as well.”

In the spirit of learning and sharing, early in the COVID-19 pandemic Bonnie set up socially distanced learning sessions for her grandchildren in her back yard, inviting guest experts to talk about topics like homelessness, immigration, the civil rights movement, LGBTQ+ issues, finance, law, philanthropy and science. The sessions inspired a granddaughter to pursue a career as a civil rights attorney.

Giving for the greater good

Bonnie counts five civically engaged family generations – from her grandmother, a labor organizer, to her grandchildren – giving their time and resources toward improving lives for others.

“My daughter asked my mother what was the most important word for her, and my mother said ‘justice.’ And I keep looking to contribute to social justice, making things better for everybody,” Bonnie says. “Giving money to organizations that help people find themselves, and grow and thrive, is important for me.”

In 2017 Bonnie and her husband Pete took a step to organize their giving beyond checkbook donations when they opened an OCF donor advised fund. The fund focuses on causes important to Bonnie and Pete, giving to organizations supporting social justice, immigration, arts, education, climate and reproductive rights. After their passing, the fund will receive the assets of their estate and their daughter will take over advising the fund’s grantmaking. Bonnie also serves as primary advisor on a family fund established by her brother, Mark Greenfield, named in honor of their mom Del.

She values the direct involvement in grantmaking a donor advised fund permits. “I want to be involved. I like knowing what’s going on in my community and being part of the decision making,” she says.

Bonnie and Pete make grantmaking decisions informed by OCF’s expertise in nonprofit organizations and projects in need of funding. Because OCF knows the organizations, Bonnie values the Foundation’s funding recommendations and dialogue.

“I feel like I get expert help all the way along. I feel like it really is teamwork. It is not just me deciding, and its not just them advising, I feel like it is a back and forth,” Bonnie says. “It’s much more meaningful.”

OCF Donor Relations Officer Sarah Hench echoes that sentiment. “I’m inspired by Bonnie’s curiosity and clarity about her values, and her orientation as a lifelong learner makes working with her an enriching experience,” says Sarah. “Her family has lived their values across generations, and it has been an honor to be invited into learning their story and supporting their ongoing legacy of giving.”

You can help improve lives for Oregonians by starting a fund to support causes you believe in.