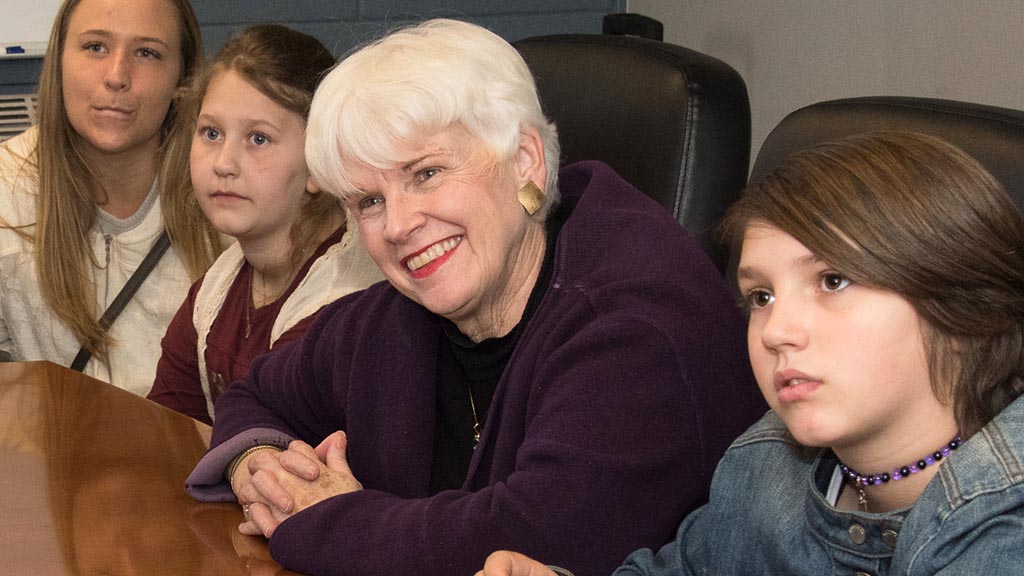 Southern Oregon business leader and TV station owner Patsy Smullin takes philanthropy to kids, but not in the way you might expect. As donor and volunteer for OCF’s classroom-based Community 101, Smullin supports a program that helps kids learn about charitable giving by letting them play the role of grantmakers – learning about community needs and making decisions to award grants that have real impact in the community.

“Some have family members or friends who battle substance abuse or addiction, lack education or have dealt with suicide,” said Smullin. “By meeting with non-profits, understanding what they do and awarding grants, the students grow up in seconds, better understanding their community and wanting to be leaders in it.”

"By meeting with nonprofits, understanding what they do and awarding grants, the students grow up in seconds, better understanding their community and wanting to be leaders in it."

Smullin is a longtime Community 101 supporter in Medford, a member of the OCF Southern Oregon leadership council and a prominent business owner and broadcast journalist. She’s president and owner of California Oregon Broadcasting, Inc., which owns KOBI-TV NBC5 and four other TV stations. This year she received the Chuck Sherman Television Leadership Award for her distinguished career, which has included time both behind and in front of the camera. Her recurring television program, “Up Close With Patsy Smullin,” has featured interviews with TV stars, first ladies, network anchors, musicians, scientists and politicians.

She joins the many individual donors and businesses giving their money or time to Community 101, started in 2013 by PGE, which remains a major contributor. (A $5,000 donation funds a classroom.) Smullin supports the program at Medford’s Washington Elementary School, McLoughlin Middle School and South Medford High School – and regularly meets with students.

Through her volunteerism and giving, Smullin carries on a family legacy of service and generosity started by her late father Bill Smullin, who always campaigned for community improvement and established a family foundation primarily to award higher education scholarships and fund preventative health needs. In addition to her support of Community 101, Patsy established funds with OCF to award scholarships to students pursuing broadcasting industry careers at Oregon Institute of Technology and Southern Oregon University.

Smullin sees an increasing need for service and giving and encourages everyone who can to give back. “I know life's never been easy for anybody, but I do think it's getting harder and harder to negotiate through a lifetime,” she noted. “Anything that can help make it a little easier, why not be involved?”