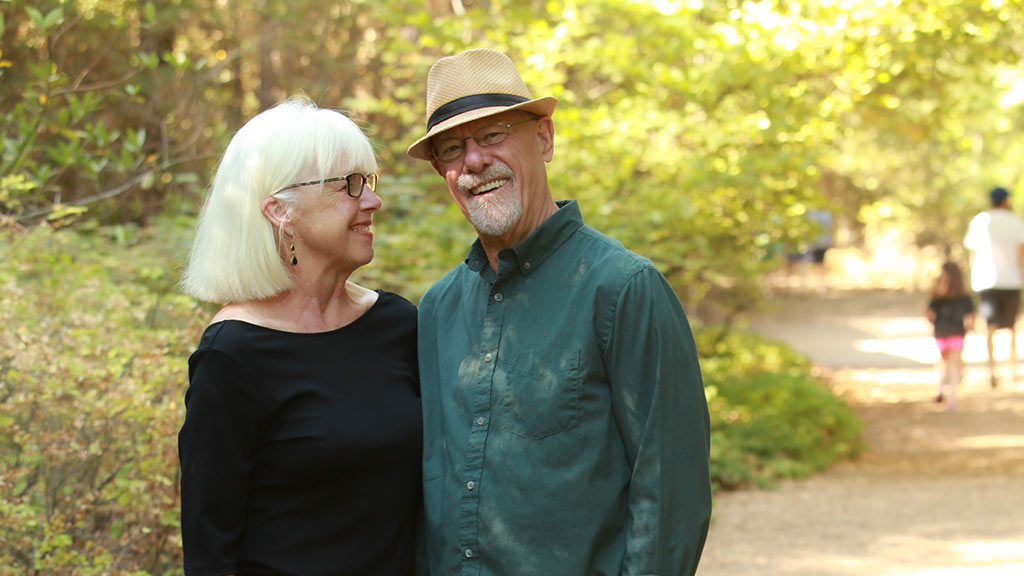 Getting Their Ducks in a Row

Donors Cathy and Paul Nicholson don’t hold back when talking about death and legacy. Their self-awareness and willingness to talk about a subject many people avoid helped them craft a specific giving strategy with OCF, ensuring support for causes they care about for generations to come.

“We’re all going to die. The question I have for you is ‘what do you love? What are you passionate about?’” Paul said. “We’re not wealthy people. We do have some resources that are going to last us through the rest of our lives. What we want is to leave a legacy to support the things we truly believe in.”

Active in the Community

The couple is involved in arts, education and volunteering in Southern Oregon.

Paul worked for 33 years with the Oregon Shakespeare Festival, the last 17 as executive director, retiring in 2012. He sits on several nonprofit boards and joined the OCF Arts Committee at its inception.

Cathy worked in education administration and business, is an artist in several media, and is in the process of setting up a nonprofit to support art for kids. She also volunteers on the OCF William and Florence Schneider Scholarship Fund committee.

Several years ago, Paul took a class titled On Death and Dying from the Osher Lifelong Learning Institute at Southern Oregon University, which helped him face issues around his own mortality. He discussed what he learned with Cathy and the experience helped them establish a giving strategy.

“When I began the class, Cathy was really uncomfortable with it. She really didn’t want to talk about dying. I’m 10 years older than she is, and the great likelihood is that I’ll die before she does,” Paul said. “My going through the class and sharing my thoughts allowed her to look at her feelings more clearly and work her way through them. Because she’s so solution oriented, something very strong and positive came from that.”

In 2018 the couple established two funds with OCF. Their testamentary fund will award one-time gifts to local nonprofits, followed by a permanent fund allocated to 50% scholarships and 50% arts and culture grants. The couple also established a donor advised fund so they can choose grantees during their lifetimes.

Their support of scholarships will help older students or those whose studies were interrupted, and those in their final years of study. The couple’s recognition of a trend toward nontraditional students and Cathy’s own experience shaped the criteria. “I finished my education in a couple of chunks with a few years in between, and those last couple of years were tough,” she said.

“If you work with the Oregon Community Foundation, there are systems and mechanism and programs in place. You can ensure that whatever funds you have leftover at the end of your lives, can go to support whatever you are passionate about.”

When planning their giving, Cathy and Paul turned to OCF. They already knew the organization through their work and volunteerism. They liked the built-in flexibility and involvement of giving through an OCF fund, the helpful staff and the stability of the organization.

“Because everybody there is so committed to the work and so very competent, we know that the money is going to be properly and carefully handled, and that the systems in place are strong and supportive,” Paul said. Cathy recalled feeling reassured. “Once our OCF funds were in place I could say ‘I’m at peace now,’” she said. “There are not going to be any questions about what’s going to be done when we’re gone.”