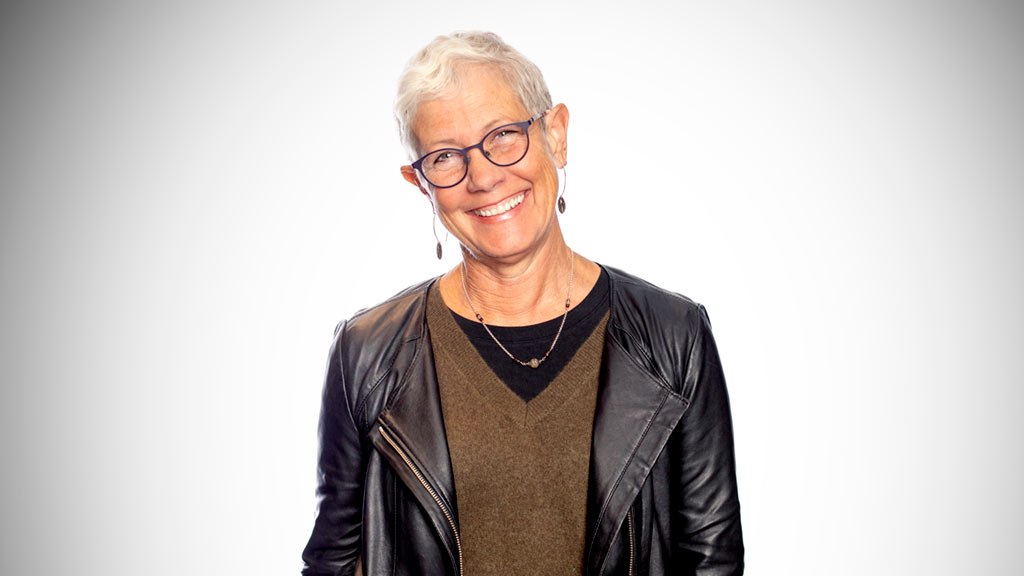 Volunteer and OCF fund advisor Dolly Woolley personifies the engaged Oregonian. She’s savvy. She’s connected. And she gives her time generously to increase opportunities for others.

Dolly started in volunteering early. She grew up in North Bend, where her parents volunteered for local organizations and the school board. At her parent’s urging, Dolly got started in service early with Girl Scout projects like litter cleanups and visiting nursing homes.

When the school Dolly attended ran out of funding and shut down, her parents put her to work soliciting support. “My parents said ‘You’ve got to go knock on doors. You get this bond measure passed soon you can get back in school,” she recalls.

Dolly earned bachelor’s degree in physical education and master’s degree in sports medicine at University of Oregon. She worked there for five years as the university’s first Women’s athletic trainer, supporting men’s and women’s track and field championship wins in 1984 and 1985. “It was post Title IX, (a groundbreaking statute intended to end sex discrimination in education) but not that far post Title IX,” she recalls. “I had a child and my approach to the work hours and travel time challenged the administration. It was such a novel concept to do a job share (my solution) at the time that my male supervisor didn’t know what to do with me.” Dolly became a “jack of all trades” after that, working in land development, contracting, as a preschool director and other roles.

While a young mother, the nonprofit Parenting Now provided Dolly with parenting guidance and support. When the organization asked her for help fundraising, she stepped out of her comfort zone. “I just wanted to give back and so when they asked if I would help out. I said, ‘Well, I don't know how to do this, but I'll try,” she recalls. “It was just calling and asking for that $100 or $200 gift.” One annual campaign led to another, and then the capital campaign came along. “That’s how I really learned about fundraising,” says Dolly.

Dolly also found a community service role model in her mother-in-law Donna Woolley. When Donna’s husband died in 1970, as a single mother she took on running her late husband’s Drain-based lumber business and thrived in the then male-dominated field. Donna expanded the firm and ventured into commercial real estate and hospitality. Like so many Oregonians, she also gave back, serving on boards for schools, colleges and the Eugene Relief Nursery. Donna also served on the OCF board from 1990 to 1999 and as its chair from 1997 to 1999 – and introduced Dolly to OCF.

After Donna passed in 2011, Dolly, with her husband Don, started advising on grantmaking for  Donna’s fund at OCF. In the early years of advising, they continued to fund Donna’s causes. They have since shifted funding to honor Donna’s intent while responding to new community needs, especially those tied to education and families.

“Sometimes it’s a huge capital project and that might take the majority of it,” Dolly says. “We think about how things are changing and what’s going on in our community, and how can we respond.” Recent grantmaking supports organizations like Springfield Education Foundation, which funds student learning enrichment, and 15th Night, which safeguards students experiencing homelessness alone.

In her role as a volunteer on the OCF Southern Willamette Valley Leadership Council, Dolly keeps abreast of evolving community needs and nonprofit efforts to address them, which ultimately helps OCF make funding decisions. “The role that we’re playing is to try to keep our ears to the ground and give feedback in terms of what's going on in the community, and the needs that that may not be on the radar of OCF,” Dolly says.

“I think in Portland, Eugene and maybe all over the state, the homelessness issue is such a huge one and I appreciate that we are trying to put more emphasis on people of color and the disadvantages that they face that are historic and systemic,” Dolly says. “I always keep thinking about kids and making sure that they get a good start.”

Dolly is in good company in Oregon. State residents volunteer at one of the highest rates in the nation, with more than 40% of Oregonians giving their time to nonprofits and causes.

Often what nonprofits need most are volunteers willing to pick up the phone and help raise funds, like Dolly. To those uncomfortable in fundraising roles but who want to help, Dolly offers that “even if it makes you uncomfortable, you can get over it and hopefully find those passion projects that really speak to you, because that makes it easier, especially if you’re asking people for donations.”

You can help improve lives for Oregonians with OCF by becoming a volunteer or starting a fund to support causes you believe in.

Northwest Youth Corps: From the Ground Up