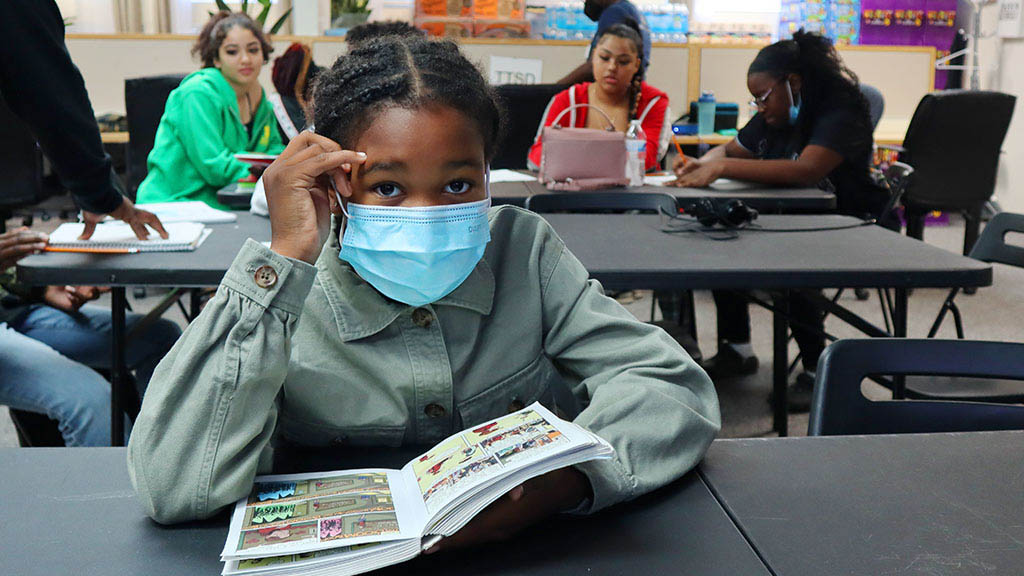 With more than 800 kids and teens relying on their in-school and afterschool programs each year, the leaders of REAP, Inc. — like many nonprofit executives — typically don’t have time to think beyond the daily direct services they provide. Nor does REAP have the staff to explore all of the organization’s ideas for transforming the life trajectories of the youth they serve.

Over the past several years, aided by capacity-building grants from funders including Oregon Community Foundation, REAP has significantly scaled up its work to elevate, empower and engage the state’s next generation of leaders. Today, REAP is leading strategic efforts and forming statewide partnerships that aim to interrupt the societal systems that hold young people back — especially Black youth and those from other historically marginalized communities.

For example, to address the mental health crisis among Black children and teens, REAP has in the past few months begun providing free mental health services for students enrolled in REAP programs and has applied for a multimillion -dollar federal grant to design, with University of Oregon researchers and other statewide partners, more effective suicide prevention tools.

To address mental health and a wide range of other issues affecting Black youth, “we’re doing work that is cutting edge and pioneering,” says Mark Jackson, REAP’s executive director. “That’s what capacity building does — it allows organizations like REAP to be innovative, to put our human resources behind driving that innovation, not to be spending our days and hours on putting out fires, only.” 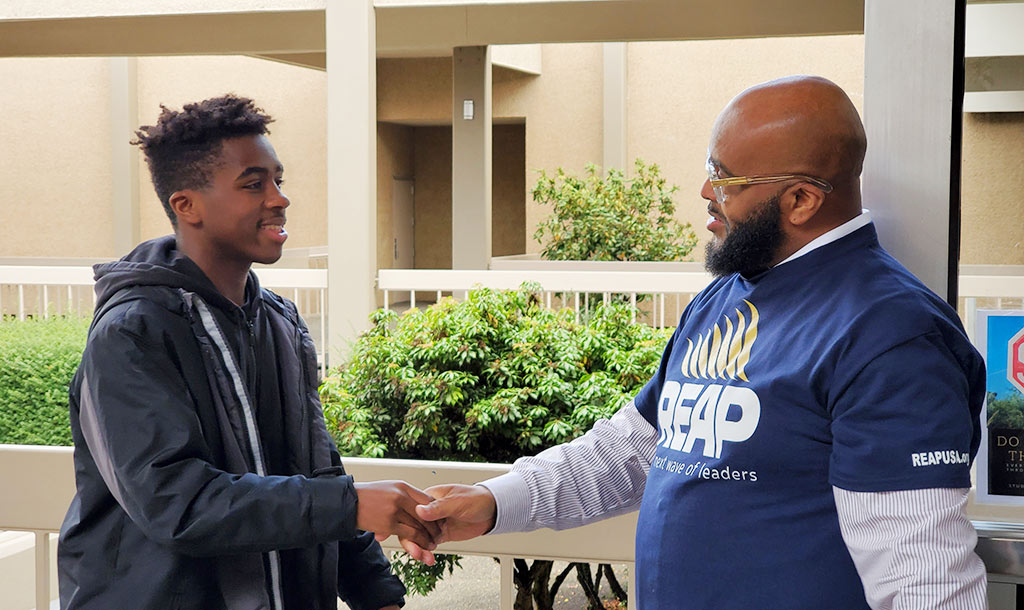 Between 2020 and mid-2022, OCF awarded $960,000 in grants to REAP and 23 other community-based nonprofit organizations that compose the Oregon Black Student Success Community Network (OBSSCN ), a pilot advisory think tank convened by OCF.

Most grantees have received a total of $40,000 to $60,000 over three years to support activities — such as paying part of a staffer’s salary — that build the organizations’ internal capacity to participate in a community of practice that explores innovations that foster and lift up Black youth, bring about education equality, and promote Black student success.

“OCF is part of the fabric that holds our quilt together,” Jackson says.

Beyond the financial support, the network of Black-led nonprofits from around the state that OCF convened in 2020 — each addressing the educational challenges that face marginalized Black children in Oregon, from different angles — has itself been pivotal, he says.

“The Black Student Success network is creating a safe space for Black nonprofit executives to learn from each other and provides a trusted space to be vulnerable and transparent. Whether you are a new or emerging or established organization, you have a place in that space to learn and to also to transfer knowledge,” he says. “That’s where the community elevation occurs, and it really empowers programs like REAP.”

Jackson and Levell Thomas, REAP’s CEO, grew up together and attended Portland public schools. As adults, the men saw untapped potential in Portland youth and a yearning among them for more opportunities and connections to mentors and potential employers. In 2001, they created REAP, a youth leadership nonprofit with an entrepreneurial bent.

Today, REAP operates an array of programs for students in grades 3 through 12 in ten school districts across Multnomah, Clackamas, Washington and Columbia counties in Oregon and Clark County in Washington. Students in REAP programs build academic, leadership and problem-solving skills; create and operate viable businesses; and advocate for the issues they care about to elected officials.

REAP students regularly speak in front of local and state decisionmakers about their perspectives and concerns, “to explain what’s most important from their vantage point to make Oregon a better place,” Jackson says.

“What we’ve found over our 21-year history is that our programs make students feel empowered and affirmed. That leads them to become more engaged in the culture and climate of the school, but also the broader community. And as a result, they do better in school academically,” he says, with lower  discipline rates and higher high school graduation and post-secondary enrollment rates, compared to Oregon public school students overall.

In this November 2022 video, REAP students in the Portland and North Clackamas school districts described in their own words what “being a REAP leader” means and the impact the organization has had on them.

In addition to student programs, REAP trains educators to be more culturally responsive to students of various backgrounds, conducts campus climate assessments, and develops programs that help schools identify and remove barriers to learning and to reduce disproportionate rates of discipline for students of color. Last year, REAP developed a Black Studies-themed language arts course at David Douglas High School in east Portland that focuses on the history, contributions and literature of Black Americans.

Recently, REAP has set its sights on influencing youth-related policy at the state level, partnering with the Coalition of Oregon School Administrators to push lawmakers to approve a first-in-the-nation Racial Equity and Justice Youth Collaborative. The collaborative, led mostly by youth ages 11 to 21 from across Oregon, would ensure that young people, especially those from communities that have been underrepresented or underserved, are meaningfully involved in creating and implementing the policies that affect their lives. The proposal, House Bill 4099, was approved by the House Education Committee in 2022; backers are optimistic it will pass both chambers when the Legislature convenes in 2023.

“That work was a direct result of the investments by OCF in capacity building to help REAP elevate student voice,” Jackson says. “It was not just specific to our community or our stakeholders. It became a statewide movement.”

Also this year, REAP was selected by the Oregon Health Authority to facilitate a youth advisory council, comprised of students from around the state, who are helping decide how to spend $1 million in pandemic aid designated to help youth and schools recover from the emotional, social and economic damage caused by COVID. REAP is helping to guide the students’ work and develop them as leaders.

Another result of REAP’s surging capacity to bring about change for Oregon youth is the organization’s multi-tiered approach to stem the increase in mental health problems and suicide among Black children and teens.

In November, REAP began offering behavioral and mental health counseling at no charge to students in its programs, of any race or ethnicity. Students can request sessions with licensed providers, including DeShawn Williams , a therapist who owns RAAP Counseling and Consulting who has worked with REAP on multiple initiatives. Anderson DuBoise — a REAP alumni and current staff member, who is pursuing a master’s degree in counseling at Portland State University — runs the new program, which serves youth experiencing depression, anxiety, trauma, suicidal thoughts, grief and loss, and ADHD.

On a broader level, REAP is co-leading an effort — with the Oregon Pediatric Society, University of Oregon, RAAP Counseling and Consulting, and Woodson Insights — to secure multi-year, multimillion-dollar funding from the National Institutes of Health to develop a Black youth-specific suicide prevention training curriculum to guide Black licensed behavioral health providers and community navigators who work with Black youth.

The project seeks to address an alarming increase in the suicide rates for Black children and teenagers over the past generation and the lack of effective, culturally-specific tools for helping them, as documented in a 2019 report from the Congressional Black Caucus. Self-reported suicide attempts rose nearly 80 percent among Black adolescents from 1991 to 2019, while the prevalence of attempts did not change significantly among those of other races and ethnicities, according to a New York Times article citing peer-reviewed research published in JAMA Network Open.

Capacity-building grants from OCF enabled REAP staff to spend the time necessary to build partnerships and map out the large-scale project, which aims to create an urgently-needed tool that doesn’t currently exist in Oregon or nationally. 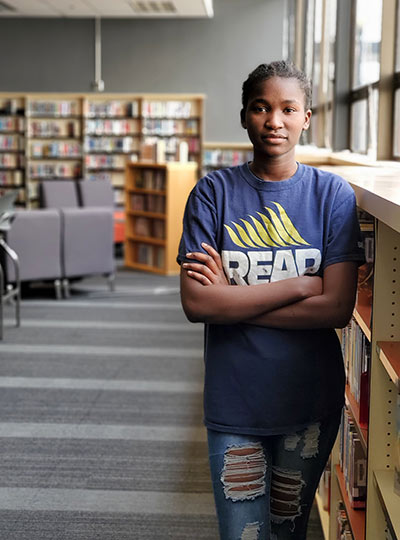 “This Black culturally-specific youth suicide prevention training is going to benefit Black-led and Black-serving organizations to equip us with the skills to support our youth dealing with suicide ideation and crises,” Jackson says. “To have dedicated personnel and dedicated staff time to move these initiatives forward is a direct result of OCF’s capacity-building funding.”

But the impact of OCF’s investments go beyond any one topic, like mental health, Jackson says. They enable REAP and its peers in the Oregon Black Student Success Community Network to generate new approaches and drive systemic change across the board, instead of having to rely on others.

“Capacity building is not so much connected to one project. It’s about building the organization's infrastructure and capacity to advance our mission. It gives us the dedicated staff time to innovate. Because oftentimes, nonprofits are just trying to keep the lights on, and we don't have time to come up and breathe and see beyond where we are,” Jackson says.

“In the past it’s always been white-led organizations coming in to help as opposed to us helping ourselves,” he says. “Capacity-building support gives us the opportunity to lead the work and move these initiatives forward.”

Learn more about REAP and other members of the Oregon Black Student Success Community Network. To support OCF’s investments in their work, please get in touch with your donor relations officer.