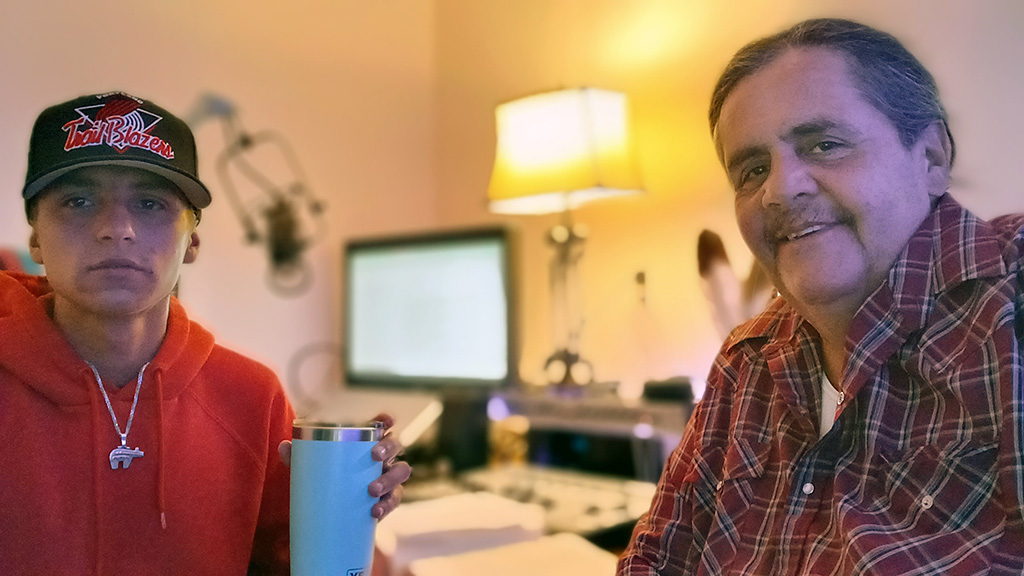 Justin Merritt and Randy Henry in the recording studio at Henry's home in Klamath Falls. 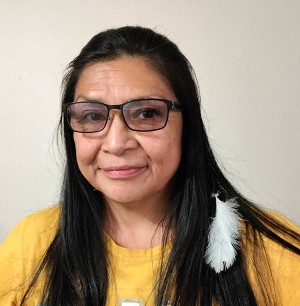 After her workday ends, CarlaDean Caldera builds interactive educational apps at her home in Salem so she can pass on to young people the Northern Paiute language she learned from her mother.

“It is important to get this knowledge out of my head and my heart and into the mainstream world,” she says. “I don’t want it to just be for Indigenous folks. I want this all over.”

In Klamath Falls, in a studio he built in his garage, Randy Henry wakes up at 4 a.m. to record a radio show he created to elevate Native American music and make the Klamath language and culture more alive to his community.

“I want to instill in the kids the sense of pride and well-being that comes from just having this available to them, to nurture their senses,” he says.

Caldera and Henry are among a growing number of Indigenous language- and culture-bearers who have received financial support from Oregon Community Foundation (OCF) to revitalize Native languages and sustain their cultural practices and traditions.

Over the past two to three years, the importance of this work — and for more funding to support the Indigenous creators engaged in it — has come up repeatedly in conversations with applicants for the Fields Artist Fellowship (a partnership between OCF and Oregon Humanities) and OCF’s Creative Heights initiative and with community members who help the foundation review grant applications, says Jerry Tischleder, OCF’s senior program officer for arts and culture.

During the same time period, COVID-19 claimed the lives of many Indigenous elders in Oregon and nationally, who carried with them generations of knowledge of Tribal languages and culture.

Spurred by the dynamic creative work of Indigenous artists, educators and culture-bearers, OCF is exploring new ways to bolster their efforts. The foundation is also looking to connect with partners and donors with similar goals.

“There are so many strong and rich Indigenous traditions that we hope to support and grow,” Tischleder says. “We are looking at this in terms of opportunities to sustain those sacred traditions and also to think really broadly about all of the ways, including newer ways, that cultural expression is coming out.”

Reaching young people, where they are

As a child in Madras, in central Oregon, Caldera spoke Northern Paiute before she learned English. Her mother, Esther Louise (Watah) Caldera, was Northern Paiute and Klamath and spoke both languages fluently. Yet by age eight, worn down by non-Native schoolmates who mocked her for what they called “babytalk,” Caldera had mostly stopped speaking her mother tongue.

As an adult, Caldera sought out Northern Paiute elders who helped rebuild and expand her language skills, which she has since shared for decades in Native and non-Native communities as a storyteller, educator, cultural advocate, culture camp mentor and curriculum developer.

Along the way, she taught herself computer coding. She learned how to create apps and videos for smartphones and tablets that teach kids how to write and speak Northern Paiute words for animals, colors and numbers. (View one of Caldera’s apps here, or under “Links” on her YouTube page.) 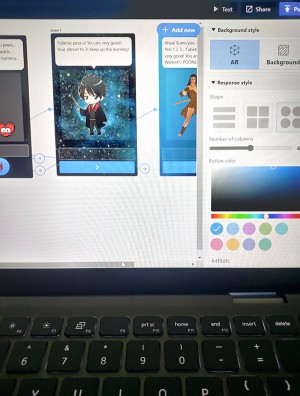 One of Caldera's apps in development.

“I just started researching other ways I could get this knowledge out there, to the kids — as opposed to doing it on paper, in books, or talking to them, because they tune you out,” says Caldera, 57, who is raising her two grandchildren, ages 17 and 11. “They're always on their phone or their tablets. So I said, ‘Oh my gosh: That is exactly where I need to be.’”

In 2021, Caldera was one of four recipients of a Fields Artist Fellowship, which provides $100,000 over two years to artists and culture-bearers in Oregon to develop and deepen their work. The funds allowed Caldera to replace her 11-year-old computer with a new one equipped for gaming and developing apps. The fellowship is also helping her to afford the licenses, training and other tools she needs to create apps without third-party platforms and to integrate animated computer graphics, virtual reality and augmented reality. She plans to create an online hub to share the materials, which will also include how-to videos for kids and adults to create their own apps.

The urgency Caldera feels has increased over the past few years as her Northern Paiute elders — as well as Hispanic relatives on her father’s side — have passed away, including many from COVID, she says.

“My elders always told me to teach what you learn. You've got to share that knowledge,” she says. “Because if it goes when you go, it's gone.”

From 1869 through the 1960s, the U.S. government worked to eradicate Native languages and cultures through policies that removed hundreds of thousands of Native children from their homes and families and enrolled them in boarding schools operated by the federal government and churches. There they were “punished for speaking their native language, banned from acting in any way that might be seen to represent traditional or cultural practices, (and) stripped of traditional clothing, hair and personal belongings and behaviors reflective of their native culture,” according to the American Indian Resource Center at University of California-Santa Cruz.

Native languages have been disappearing ever since. COVID further raised the stakes.

Native Americans and Alaskan Natives were nearly three times as likely to be hospitalized and more than twice as likely to die from COVID, compared to non-Hispanic white people, CDC data shows. In August, federal health researchers announced that life expectancy for Native Americans and Alaskan Natives fell by six and a half years during 2020 and 2021, compared with about three years for all Americans.

The highest COVID death rates for all racial and ethnic groups in the U.S. were among people 65 and older. When those elders are the last remaining speakers of a language, more than words are lost.

Language represents how a group of people at a given time conceptualize the world, Oregon linguist Jedd Schrock told Underscore News in March 2022: “You lose a language, you lose a culture. Culture and a language are really the same thing.”

Many individuals, Tribes and organizations have been working for decades to revitalize Native languages, including the Northwest Indian Language Institute (NILI) at the University of Oregon, which celebrated its 25th anniversary this year. The language preservation programs of several Oregon-based Tribes, including Confederated Tribes of Warm Springs, the Confederated Tribes of the Umatilla Indian Reservation, and the Cow Creek Band of Umpqua Indians, and how COVID affected them, were documented by Street Roots newspaper in July 2021.

OCF is currently working with Oregon’s nine federally-recognized Tribes to support an array of language, arts and cultural heritage projects.

Also, in addition to Caldera and Henry, other Indigenous artists and culture-bearers have recently received OCF grants. Recipients include the nonprofit Confluence with filmmaker Woodrow Hunt, a Cherokee, Klamath, and Modoc Tribes descendent, who received a $100,000 Creative Heights grant in 2021 to create and showcase “Voices from the River,” a multimedia exhibit that features firsthand accounts about the culturally significant places and experiences of Indigenous people from the Columbia River system.

Expanding such support though a long-term, Indigenous-focused program would be welcome, says Elizabeth Woody, an enrolled member of the Confederated Tribes of Warm Springs, executive director of the Museum at Warm Springs, and a former Oregon poet laureate.

For any new program to be successful, funders should ensure that they form lasting relationships with Tribes, deliver dollars directly to the Native people doing the work, and determine effective methods for assessing the impact of financial support, says Woody, who is also a former program officer at Meyer Memorial Trust, the founding secretary of the Portland-based Native Arts and Cultures Foundation, and a past recipient of an OCF Creative Heights grant.

It's also vital to keep in mind why there’s a need to revitalize Native languages, which hold vast amounts of knowledge and unique worldviews, in the first place, Woody says.

Woody recalled a conversation she had with Linda Clingan, co-chair of the Board of Regents of the Museum of Warm Springs.

“Linda emphasized to me, ‘If we give every single American Indian person in this country enough money to live their entire life, that would not be enough to compensate for what's been taken from them.’ That wealth transfer was the greatest this country has ever seen. This thought centers on equity, diversity and inclusion and carries a great responsibility,” Woody says.

Language and music as reconnection

Henry, an enrolled member of the Klamath Tribes, was raised by his aunt. She took him with her when she moved from the Klamath Basin to the Umatilla Indian Reservation in northeastern Oregon, after Congress terminated federal recognition of the Klamath in 1954.

As a boy at Umatilla, Henry grew up hearing traditional songs and stories from renowned leaders including Chief Clarence Burke. When Henry returned years later to the Klamath Basin, he felt compelled to share what he’d learned, especially with young people. Finding no radio station regularly serving the Native American community around Klamath Falls, he created Modoc Broadcasting, which listeners can stream online.

Henry, 61, received a $100,000 Creative Heights grant from OCF to support his work over two years to operate Modoc Broadcasting and to create a weekly pow wow music, language and storytelling show modeled after “Talking Drum,” produced by Marge Kalama at KWSO Community Radio on the Warm Springs reservation.

“What I want to do is make the language available for the kids at any time, so they’re always able to pick something up. And they like music and they want to hear that, too, and I just play really good music — a lot of Native music that you don’t hear anywhere else,” he says. “So what I’m doing is combining the two, and doing it in an artful, respectful manner.”

Each day, Henry puts in four hours of radio work before 9:30 a.m., when he starts his full-time job as a health insurance plan advisor for retirees. He is motivated by a goal much larger than entertainment or language instruction for its own sake. Providing an easy way for Tribal members, especially young ones, to learn their Native languages and traditions is a path toward reclaiming the land that the Klamath lost, he says.

OCF is looking to connect with partners and donors interested in supporting Indigenous language, arts and culture in Oregon. For more information, please contact Jerry Tischleder at jtischleder@oregoncf.org or Chey Kuzma at CKuzma@oregoncf.org.