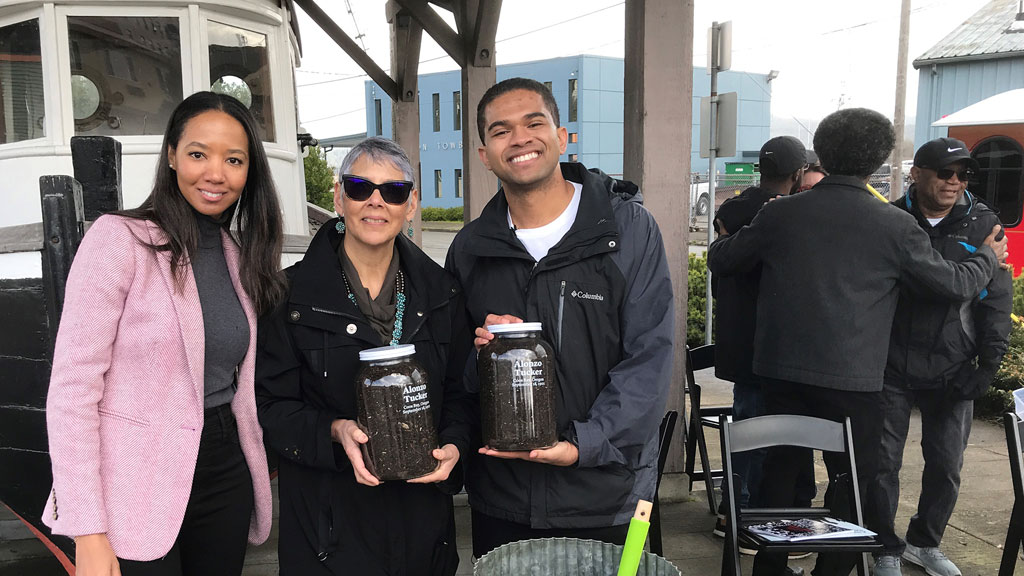 As a University of Portland undergraduate who says he grew up in a conservative Republican household, Taylor Stewart found his calling to fight for social justice during a post-graduation trip to the South for the first time.

In the interactive galleries at the Mississippi Civil Rights Museum, Stewart noticed how the attention was focused on the revolutionary actions and sacrifices of everyday people, not the recognizable civil-rights icons. During his visit to Alabama, he said he was inspired after listening to a recorded 1967 speech of Dr. Martin Luther King Jr. discussing “the fierce urgency of now.”

And he spent hours in Montgomery’s National Memorial for Peace and Justice, which acknowledges the names of more than 4,400 Black men, women and children who were lynched, shot, beaten to death or burned alive between 1877 and 1950. Among the victims’ names, Stewart found his family’s surname listed multiple times.

“I had always known about lynching in the abstract; I had no idea of the magnitude of it all,” said Stewart, who is now pursuing his master’s in social work from Portland State University. “I was faced with a question: How do you reconcile lynching?”

Eventually, after he returned to Oregon, Stewart founded the Oregon Remembrance Project in partnership with the national Equal Justice Initiative (EJI), based in Montgomery. Stewart intends to use his organization to help memorialize the life of Alonzo Tucker, the only recorded Black Oregonian who was lynched in Coos Bay in 1902. With organizing support from Stewart and EJI, several hundred people gathered in February 2020 to help gather soil from the various spots where Tucker was captured, shot and hung from a bridge. The collected soil filled two glass jars with Tucker’s name on it. One of the jars is on display at the Coos Bay History Museum. The other will remain at the Montgomery-based National Memorial for Peace and Justice, the first memorial to acknowledge America’s form of racial terrorism by white mobs of adults and children. A permanent, two-sided, outdoor memorial is expected to be erected this summer.

“In order to get to this space of where we find reconciliation with history, we’re starting with the truth-telling work,” Stewart explained.

Oregon Supreme Court Associate Justice, the Hon. Adrienne Nelson praised Stewart for his Oregon Remembrance Project initiative. “What Taylor is doing is great as a young person who didn’t know his history,” said Nelson, who sits on the Oregon Community Foundation’s Metropolitan Portland Leadership Council, where she chairs the Connections to Black Communities committee. “He learned about it and that cultivated a need for him to document this guy’s life and share the information with others as a way to help people reconcile that it (lynching) happened in this state, as it did in others.”

As we saunter toward February, designated in 1970 as Black History Month, the Hon. Nelson encourages white Oregonians to stop ignoring the full truth of this country and state’s historical treatment of African Americans. The intentional, systemic bias against Blacks is still embedded within political structures, schools, legal and criminal justice systems and other social institutions and it needs to be exposed and dismantled.  “Once we learn more of our collective history,” Nelson said, “we become more aware and begin to address the root causes of the discontent in our country today.”

In ways large and small, the consequences of the COVID-19 pandemic are highlighting those long-existing racial inequities and are sparking a call for a racial reckoning. In Oregon, more than 1,000 individuals and 100 arts and culture organizations across the state signed a 2020 open letter calling for Gov. Kate Brown, Portland Mayor Ted Wheeler and other state and local officials to condemn the ongoing anti-Black violence, as “racism is in the DNA of our criminal justice system and that black lives still do not matter in our country,” the letter read.

An Oregon-based artistic project might also be the first to use music, singing and poetry to call attention to America’s history of anti-Black violence. “An African American Requiem,” a project created by Portland composer and singer Damien Geter, infuses classical music with various musical styles from the Black diaspora. The concert-length production, organized by Resonance Ensemble, uses the traditional Latin Requiem text, Negro spirituals and texts from several civil rights activists, and the voices of several area choirs and renowned soloists. The poetic words of the final movement were written by S. Renee Mitchell, poet, performer and visionary for I Am MORE (Making Ourselves Resilient Everyday), an inaugural member of the Oregon Black Student Success Community Network (OBSSCN), an OCF-funded initiative that supports 23 Black-led organizations around the state. 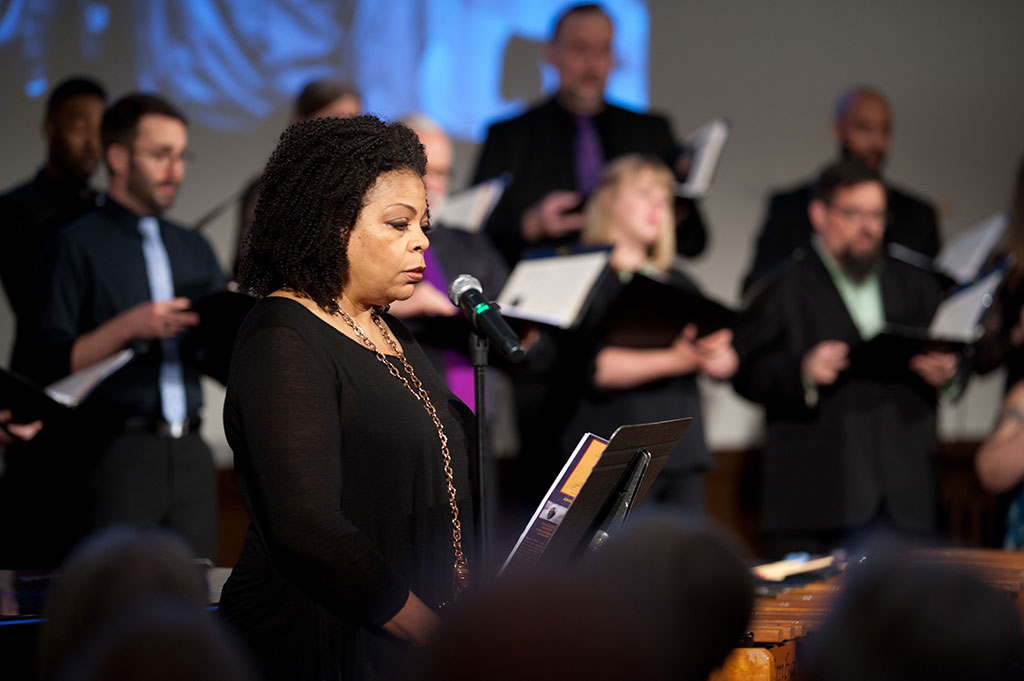 Because of the COVID-19 pandemic, the date of the Requiem concert was moved to May 7, 2022. But the Resonance Ensemble is also creating three free video premieres from Geter and two other composers across the country to create work that helps envision a world free of racial and gender violence. “Racism and injustice tarnish the American tapestry and this Requiem might just be one of the agents through which we begin to examine the stains, in an effort to eliminate them,” said A. Mimi Sei, who serves on the Resonance Ensemble’s board of directors.

An examination of America’s unique form of racism has also been fueled by the nearly daily Black Lives Matter protests in Portland that started in May 2020 after the police killing of George Floyd, a Black man in Minneapolis. In addition, the writings of national scholars, such as award-winning journalists Ta-Nehisi Coates, with “The Case For Reparations,” and former Oregonian reporter Nikole Hannah-Jones’ 1619 Project in the New York Times, have documented the effects of America’s 250 years of chattel slavery, then, 90 years of Jim Crow laws, another 60 years of segregation, and 35 years of state-sanctioned red lining and other ongoing forms of racially based, institutionalized discrimination.

Oregon, in particular, had three Black exclusion laws specifically designed to discourage Black people from ever settling the state. Two of the laws were rescinded in 1845, three years before Oregon officially became part of the U.S., and in 1854. In 1857, though, Oregon voters banned any new Black residents, and made it illegal for Blacks to own real estate, make contracts, vote or use the legal system. In 1926, the exclusionary clause was removed from the Oregon Constitution. Other racist language was removed in 2002.

During a Jan. 13 online discussion about reparations with nationally known Black scholar Dr. Joy DeGruy, Bahia Overton spoke of her frustration and heartbreak with having to incessantly interact with racism. “I think about the sacrifices all of my grandparents made for us, and I think about the fact that where we are right now, a lot of folks my age are feeling right now that they want to quit America,” noted Overton, head of the Portland-based Black Parent Initiative, another OBSSCN member organization. “They are tired of this. It’s a level of exhaustion….Where is the hope?”

Stewart’s hope is that raising awareness of the racially based atrocities that Americans have inflicted upon its residents of color will help push the state and our county to move - more intentionally - toward racial reconciliation. He pointed out that Berlin, Germany, created a Memorial to the Murdered Jews of Europe, also known as the Holocaust Museum. The Kigali Genocide Memorial commemorates the 1994 Rwandan genocide, and has the remains of over 250,000 victims interred there. “When you come to the United States, we don’t tell you about things like lynching,” Stewart says. “It needs to be part of our collective memory and our collective consciousness.”

In an article titled “Living Up to Our Values,” Nelson recently issued a similar call to action for Oregonians to stop “looking the other way or allowing the status quo to continue.”

“You can tell a great deal about a country and a people by what they deem important enough to remember, honor and celebrate,” Nelson wrote in the 2020 Appellate Almanac, the online publication of the Oregon State Bar. “But we learn even more about a country by what it chooses to forget - its mistakes, its disappointment, and its embarrassments.”

In an era of uncertainty, fear and economic disparity because of COVID-19, OCF is spearheading a groundbreaking initiative focused on raising hope and possibilities for Black students. Twenty-three culturally led organizations around the state have been chosen to pilot an advisory think tank, the Oregon Black Student Success Community Network (OBSSCN). Learn more.

Giving Back: It’s a Family Affair