The Bonnie Bronson Fellowship is an annual award made to an artist living and working in the Pacific Northwest. The award is a cash prize (currently $10,000) and purchase of a work of art for the Bonnie Bronson Collection, which is housed at Reed College and displayed prominently throughout campus. Artists may not apply for this award and the new Fellow is informed with a simple phone call from the selection committee.

The Bonnie Bronson Fund was created by family and friends in memory of Oregon artist Bonnie Bronson, who died in a climbing accident in August of 1990. Bonnie's art works included enamel on steel sculpture, welded and painted steel collages, painting and carpet design, and were considered a powerful force in the Pacific Northwest art community in her lifetime.

The purpose of the fund was to publish a catalog documenting Bronson’s work and life, and to award an annual fellowship. Publication of the catalog coincided with the Bronson retrospective exhibition mounted by the Portland Art Museum in 1993.

Since 1992, the Bonnie Bronson Fellowship Committee has selected fellows annually through a confidential nomination process. The guiding principles are to advance and encourage creative and intellectual growth in a working artist of the Pacific Northwest region, specifically Oregon and Washington. 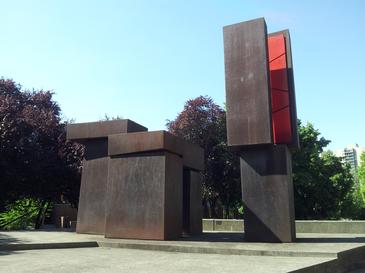 An exhibition of the Bronson Fellows’ works was held at the Ronna and Eric Hoffman Gallery of Contemporary Art, Lewis and Clark College, curated by Hoffman Director Linda Tesner. A full-color catalog of the Fellows' work was published and is available online or at the Hoffman Gallery.

Contribute to the Bonnie Bronson Fund.