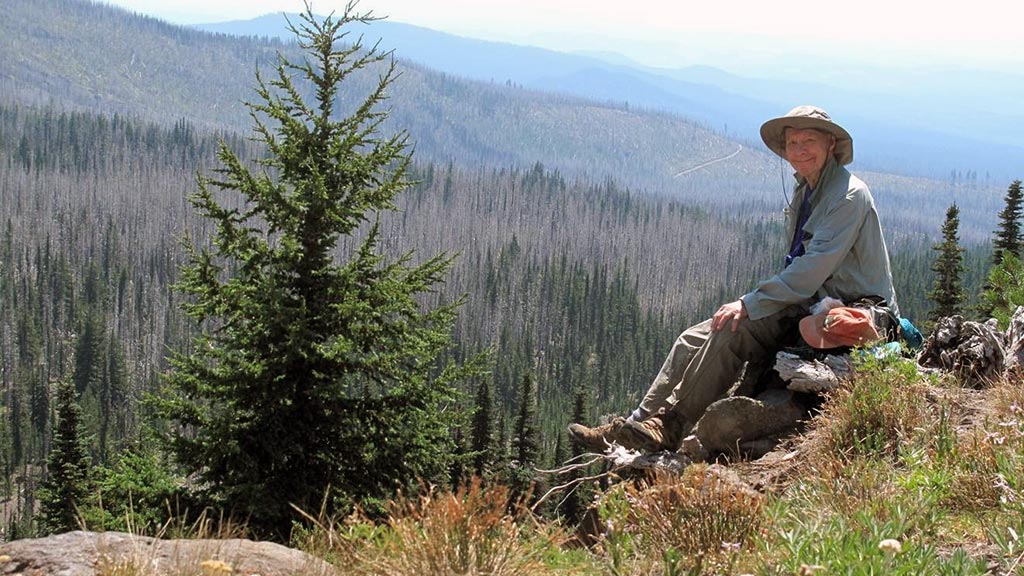 Love for the Outdoors Powers a Legacy of Conservation

Chuck McGinnis, embodies values held by many Oregonians, enjoying the region’s scenic landscapes and working to protect them. As an outdoor adventurer, advocate, volunteer, charitable fund advisor and an OCF donor, his legacy of conservation will benefit generations of Oregonians, complementing the efforts of his late wife Gail Achterman.

As a child Chuck was influenced by early experiences that led him on a path to fitness and outdoor activities.

Chuck was a very active boy, and his restlessness drove his mother to send him outside the house at every opportunity. He spent summers and other vacations helping relatives grow crops in farms in Troutdale and Washington.

His father often took him fishing. Chuck recalls, “He'd actually take me out of school, which wasn't a bad thing because I was hyperactive and I wasn't learning much in school anyway. I learned more going with him and being out in those days. The two traipsed to lakes in the Mt. Hood Forest in the 1940s when much of the area was undeveloped wilderness. A conservation-oriented Boy Scout leader also left an impression on Chuck.

Structured exercise entered Chuck’s life a few years later. An uncle who had played football for the Oregon Webfoots (now Ducks) — including in the 1917 victorious Rose Bowl vs. the Penn Quakers — introduced a 12-year-old Chuck to legendary trainer Joe Loprinzi at Multnomah Athletic Club (MAC). As Chuck recalls, “He said, ‘Joe, bulk this boy up’ and he did.” Seventy-two years later, Chuck remains an active MAC member, still exercising two hours daily at the club.

After recognizing his own aptitude for law while enrolled a law course and working as a funeral director in the family business, Chuck set off to Willamette University’s law school after the death of his father.

Law school and work kept Chuck too busy for outdoor pursuits. Soon after completion in 1964, he set out with a friend to the Cloud Cap Inn area of Mt. Hood. Without a stove and unprepared for camping in the cold rain and snow, he sought out shelter at the locked up old inn. Instead, he found lights on nearby at the Snow Shoe Club. His knock was followed by friendly greetings by club members, who invited him in to dry out by a warm fire. Beers followed, as did an invitation to sleep inside. He woke to six inches of fresh snow outside. Still a member of the Snow Shoe Club today, Chuck helps maintain supplies at the lodge.

A career in corporate law to meet his basic living needs, helped Chuck spend as much time as possible outdoors. “It wasn't my life. It was a job. I was pretty fast at getting stuff done so I could be there eight hours a day, five days a week,” Chuck recalls. “I quit when I was 58. I was just tired of having my nose pressed against the glass looking outside.” 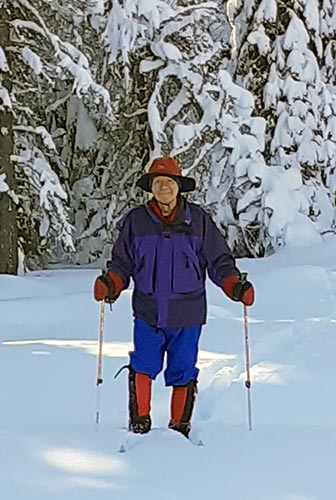 Over the years Chuck racked up countless hikes and ski trips, and recounts at least 55 outings to the North Cascades, where he and friends climbed rugged routes like Ptarmigan Traverse, Perfect Pass and Glacier Peak. Recent hikes include treks on Mt. Adams and in the Columbia River Gorge. Chuck's most recent hike in March 2022 was a demanding 6 mile, 1,200 foot elevation gain trek in the Gorge.

An advocate for conservation

In the 1960s, Chuck found the public lands around Mt. Hood changing. Roads were built where hiking trails had been when he was a boy. “The place was quickly disappearing in clear-cut. And the old growth forest was flying out down the road on log trucks,” Chuck says.

Concerned, he joined of a group of professionals called the “Mt. Hood Forest Study Group” to advocate for wilderness preservation in the Mt. Hood National Forest. The group published a proposal for wilderness preservation and shared it with the chief of the Mt. Hood National Forest. They held meetings with elected officials and the editors of influential newspapers.

“We weren't saying anything different than the long-haired hippies who were marching in the streets and protesting, but we somehow were part of the establishment,” Chuck says. “You have to understand the time. This was when the timber tail wagged the dog.”

The newspapers editorialized in the group’s favor. The Forest Service adopted the wilderness plan, setting aside even more land than the proposal requested. As the years passed, the more acres were set aside as wilderness, culminating in the forest’s eight designated wilderness areas totaling 311,448 acres today.

Chuck’s advocacy continued with his role as a founding member of 1000 Friends of Oregon. He joined a cadre of professionals to ensure counties complied with Oregon’s groundbreaking land use planning, established when Governor McCall signed Senate Bill 100 in 1973.

An early retirement didn’t slow Chuck down; it just shifted his focus.

He became a master woodlands manager, certified by OSU cooperative extension. With his certification, Chuck volunteered to create and implement a forest management plan for five years for Oregon State University’s Ram’s Dell Forest in Molalla – one of the several research plots that make up OSU’s 15,000 acres of managed forest lands. He also earned a master watershed steward certification to manage the forest’s riparian areas.

Chuck currently manages 25 acres of forest land held in common with property owners in the area around his cabin near Mt Hood.

He also became a master gardener, building on what he learned farming in his youth and growing his own 1,200-square-foot garden.

Gail Achterman, whom Chuck married in 1980, threw herself into work in environmental law and public policy. As an associate and partner at the law firm Stoel Rives, she specialized in natural resource and environmental law. In other roles, she served as executive director for the Deschutes River Conservancy, director of the Institute for Natural Resources at Oregon State University, chair of the Oregon Transportation Commission and served on several nonprofit boards. Gail made a significant contribution to conservation in Oregon by participating in drafting legislation that created the Columbia Gorge National Scenic Area in 1981.

“She was very good at what she did,” Chuck says. “If I would have let her, she would have worked seven days a week. But she liked to go on adventures. She went on big backpacking trips with me and she liked it. She just needed to be pulled away.”

After Gail succumbed to cancer in 2012, an OCF donor advised fund in her name was established to focus on funding environmental work that meant so much to Gail. With his sister-in-law Peg, Chuck advises on the fund, choosing grantees with Gail’s wishes in mind. That includes support for Friends of the Columbia River Gorge and 1000 Friends of Oregon, as well as other organizations working in areas of outdoor education and conservation: Cascade Pacific Resource Conservation & Development, The Trust for Public Land, The Nature Conservancy, Mazamas (for the Mountain Science School) and The Wetlands Conservancy.

Chuck opened his own field of interest fund with OCF in 2021, funded with a qualified charitable distribution (QCD) from a retirement account (IRA). His fund complements Gail’s by supporting organizations working in areas of land acquisition and stewardship; environmental innovation, research and education; habitat conservation; citizen engagement and public interest law organizations. As a discretionary fund of OCF, the field of interest fund will provide resources for OCF to advance these causes, complementing the goals of the donor advised fund and increasing the total impact on environmental stewardship. Given Chuck’s familiarity with OCF through his work with Gail’s fund, OCF was a natural choice for the new fund.

It all adds up to a momentous legacy that will make an impact on Oregon for generations to come.