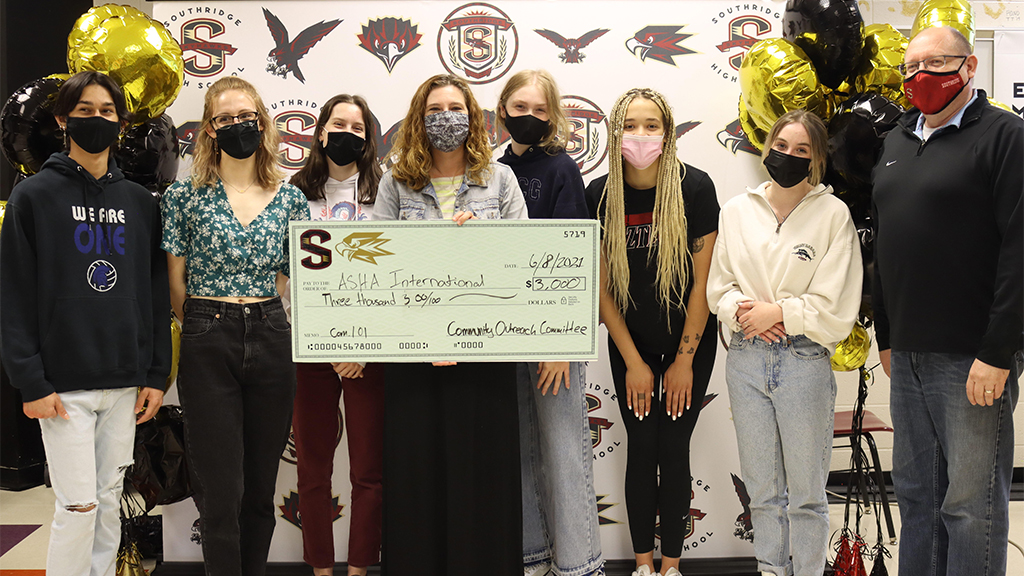 Raul Marquez is one of five siblings whose parents migrated from Mexico to Salem over two decades ago. Marquez, who received a George A. Russill Scholarship through OCF, is on track to graduate from Willamette University as a sociology major with a double minor in political science and economics. Marquez’s direction today is shaped in part by his experiences with community resources and participation in a high school philanthropic giving project, both linked to OCF.

His family benefitted from resources from community centers that focused on immigration, new parents, and low-income families—organizations like Family Building Blocks (FBB) FBB is an education-centered nonprofit based in Salem whose mission is to keep children safe and families together. Marquez formed a strong connection with FBB as he grew up, and later thanked them by contributing to their organization through a school-based philanthropic giving project, known as Community 101.

At McKay High School in Salem, Raul followed in the footsteps of his older siblings and participated in the after-school Community 101 (C101) program that lets students give back to their communities through a philanthropic lens. C101 is student-led and funded by OCF. Students decide what issues to support, and which mix of nonprofits to fund, contributing to a brighter future for themselves and their communities. One of the issues that Raul’s class focused on funding was housing and child safety, which directly related to FBB and his own experiences.

Community 101 is a statewide program that is implemented in over 40 schools in Oregon. This program began a little over 20 years ago in partnership with Portland General Electric Foundation (PGE) and OCF. The successful program has created a new lens for students to pay attention to what their community needs, and how their impact makes a difference. Eventually, OCF took over administration of C101 to continue student involvement across the state.

“We saw the value of really supporting the philanthropists of the future,” says Carly Brown, Program Officer,  Community Engagement at OCF “With this program, young people can see themselves giving back money to the community and maybe want to pursue as an adult.”

OCF provides $5,000 to each participating school and lets the schools choose how they want to engage students, whether through classes or after-school clubs, like at McKay High School. Teachers usually implement the programs in their classes and act as advisors to students, while the students themselves decide which causes and organizations to fund. Students also reach out to organizations to invite them to apply for funding.

Katie Dearing is the Community 101 Coordinator at OCF. Before she joined OCF, she was actually a teacher running C101 in her own classroom.

“When I was a C101 advisor, I really felt like it was such a cool opportunity for students and a great way for them to develop 21st century skills and engage with their community,” says Dearing “To be able to see the creative ideas that students are finding, and the specific community needs that they are able to address is so inspiring, interesting, and a useful look into what future philanthropists are identifying.”

Marquez actively participated in Community 101 at his school his early years in high school. His experience with C101 shaped his mindset and introduced him to the world of philanthropy and how to give back to his community.

“Had I not had the experience with Community 101, I don’t think I would be the person that I am today,” says Marquez.

C101 is most commonly seen in high schools in Oregon, with about 40 high schools participating in the previous school year. Two middle schools and two elementary schools also participate. All grade levels receive the same curriculum Teachers can apply for their schools to participate in this program through OCF.

The program typically encourages students to have in-person meetings with themselves, the community, and their organization partners. COVID-19 brought a heavy toll on all students and teachers and Dearing was afraid that the pandemic would create a lack of engagement in the program. Surprisingly, students stayed engaged and motivated despite moving to virtual classes. Students actively shifted their mission statements to focus on issues that were heavily impacted by the pandemic.

“One of the things that has come out of COVID is some really creative solutions, creative thinking, and adaptability,” says Dearing.

During the 2020-2021 academic year, a class in Wallowa County identified a lack of mental health resources and healthy outlets for youth. The class came up with an idea to build a skate park in the community as a social gathering space for youth to be outside of school. Skate parks and skateboarding area great tool to help youth deal with mental health issues. They get physical exercise while learning how to balance the mind and body, and the complexity of the activity stimulates and improves brain function. The project gained a lot of traction and eventually resulted in the program receiving almost $75,000 in grant funds from the community to help expand the successful skate park.

“I personally was able to grow as an individual and learn a lot and grow and build relationships with people within my community,” says Marquez. Like C101, Marquez’s scholarship, the George A. Russill Scholarship, is funded through OCF. “[Community 101] is a unique experience, it opened up a lot of doors for me.”

If you are a teacher interested in advising a Community 101 classroom or afterschool program, reach out to program coordinator Katie Dearing at kdearing@oregoncf.org to learn more or to request to be notified when the 2022-2023 C101 applications open. If you are interested in supporting a classroom this year or in the future, reach out to your Donor Relations Officer or give online.

'Seed Fund' Encourages Others to Give

Valuing and Supporting Artists Through the Fields Artist Fellowship