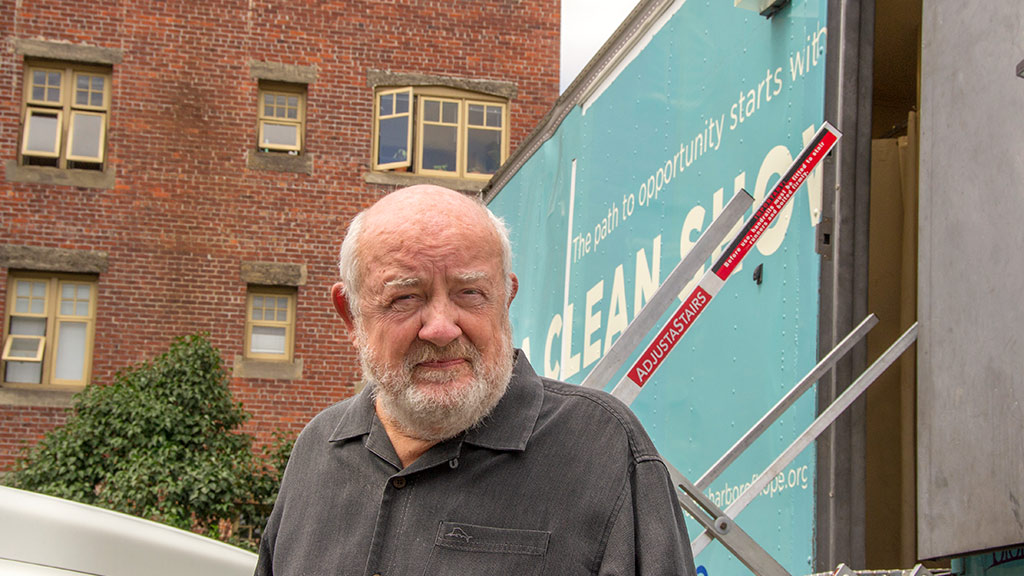 Hygiene and Housing: How Oregon Harbor of Hope is Bridging the Gap Through the Pandemic

Shortly after Oregon’s COVID-19 “Stay Home, Save Lives” order took effect, I received a phone call from an unfamiliar number. “Megan, it’s Homer Williams. I need to talk to you.”

I’d met Homer, a successful real estate developer and founder of nonprofit Oregon Harbor of Hope, a handful of times in the preceding months to discuss solutions to Oregon’s homelessness crisis, but I was surprised to hear from him that rainy March day. In the midst of fears of the pandemic and the Governor’s orders to stay home, I was even more surprised to learn that Homer was calling me from a truck as he and fellow Harbor of Hope employees were distributing tents and sleeping bags.

He said that he’d been out in Rockwood earlier in the morning, then to Lents, and finally back downtown distributing items to people experiencing homelessness. Everywhere, people desperately needed access to hygiene like laundry and shower facilities.

When day shelters, libraries, coffee shops, and public restrooms were shuttered by COVID-19, people experiencing homelessness lost their access to running water--- which is key to staving off preventable skin infections and other maladies. They also needed sleeping bags and tents to sleep outdoors because shelters were operating at reduced capacity to meet required socially-distanced spacing. Homer expressed a need for more mobile shower units like the one operated by his nonprofit, Oregon Harbor of Hope. “Any chance that OCF can help?” Homer asked.

In the months since that phone call, Homer has reached out a number of times to share updates from the front lines, to recount stories of people grateful for basic services such as showers, and to share Oregon Harbor of Hope’s expanding role in helping keep Oregonians safe and housed.

A former real estate developer turned homeless advocate, Homer is passionate about finding creative solutions to our state’s growing homelessness crisis. For most of his career, Homer was known in Oregon and beyond for his real estate development work, including Portland projects in the Pearl District, the South Waterfront, and Forest Heights. Homer’s journey into his new role as homeless advocate began by happenstance, when he had a few extra hours on a business trip to San Antonio. He noticed an article in the local paper about Haven for Hope, a navigation center providing emergency shelter, transitional housing and wrap-around services under one roof. He phoned the San Antonio mayor’s office and asked if they could help him set up a quick visit before his flight departed. Once at Haven for Hope, Homer was impressed by the collaborative model of 40 nonprofits onsite offering people what they needed to obtain and maintain housing.

Empowered by the research, Homer launched Oregon Harbor of Hope, a nonprofit dedicated to addressing homelessness. Homer recognized that the crisis requires that the private and public sectors work together. Homer also came to a conclusion that was seemingly at odds with his developer background. “I figured out early on that we can’t build our way out of this,” Homer said. Building takes too long, and people need shelter immediately. With that in mind, Oregon Harbor of Hope’s framework provides a range of solutions, from emergency services such as mobile food, laundry and shower trucks; short-term shelter, including the River District Navigation Center in Portland; and longer-term solutions including a home share program and affordable apartments.

In the past few months, Oregon Harbor of Hope, with support from donors including OCF’s Oregon Community Recovery Fund, has distributed thousands of tents, sleeping bags, and face masks around the Portland Metro region. Its mobile shower and laundry trucks offer a rare opportunity for people experiencing homelessness to access hygiene services through the pandemic. And they’re working on longer-term solutions, too.

In the same collaborative vein that Homer witnessed in San Antonio, Harbor of Hope partners with dozens of other service providers in the region and readily shares procured resources. Tents and sleeping bags are dropped off at Portland Rescue Mission, Rose Haven, Street Roots, and even as far away as the Troutdale Police Department. Surgical grade masks are given to area hospitals, while the non-surgical masks are distributed at campsites and to people working for nonprofit organizations. Homer believes in supporting other organizations engaged in work around homelessness. “There are so many good people on the front lines. The quality of people who work in this space—you just can’t believe it,” Homer recounted, quickly adding praise for his own team including co-founder Don Mazziotti, Lisa Marandas, Marissa Cade, Matt Bordonaro and Susan Gadotti. “This is a team effort.”

COVID has delivered a fierce economic blow, and it’s reflected in the increasing need. “We are seeing different faces at the trucks and in the food lines,” Homer said. “Some of these are people who have never been in a food line in their lives.”

People of color, already disproportionately impacted by housing insecurity, have also been harder hit both economically and by the health impacts of COVID. “We have a structural issue, and we need to address it. Everybody deserves a safe place to sleep, they deserve hygiene, healthcare, and food—those are the basics of life,” Homer said.

Homer also recognizes the value of respect and employment opportunities for people experiencing homelessness. Oregon Harbor of Hope’s mobile shower and laundry services are operated exclusively by people experiencing homelessness. Over 40% of guests at the River District Navigation Center are employed, but most fall short of making enough money to find affordable housing—another symptom of the expensive housing market that contributes to Oregon’s homelessness crisis.

Homer worries that if government support slows as the pandemic continues to unfold, the need for basic services and housing will increase exponentially. With a keen awareness of the real estate market, Homer also recognizes that the hospitality industry faces a long, slow recovery. The confluence presents a silver lining for housing, according to Homer. Oregon Harbor of Hope began to explore the feasibility of repurposing hotels and motels into affordable apartments. At a cost of $85,000 per unit, it’s significantly more cost-effective than building affordable housing, which averages $300-$350,000 per unit. And, as Homer said, “it’s here today—not in four years.” Impressed by the cost effectiveness of this model, the Association of Oregon Counties asked Oregon Harbor of Hope to assist with feasibility studies of hotel and motel properties around the state that could be purchased and converted to affordable apartments.

Home sharing is another solution Oregon Harbor of Hope has developed, preventing foreclosure for homeowners while also providing a room at a reasonable rate for renters. “It’s about compassion, compatibility, and aging in place,” Homer said. Oregon Harbor of Hope’s new HomeShare program matches homeowners and renters through proprietary software tools. The mutually beneficial match has a serious upside. Their study revealed more than one million spare bedrooms in Oregon. At a two percent penetration rate, HomeShare could house 20,000 people while allowing another 20,000 to retain their homes. “We’re creating inventory out of thin air and it’s already paid for,” Homer said.

Oregon Harbor of Hope’s framework is a continuum, offering interim solutions to alleviate immediate suffering and need while more permanent housing is being built. “All we’re doing is building a bridge,” Homer acknowledged. But it’s a bridge that’s desperately needed while Oregon’s underbuilt housing supply catches up with the demand.

“I get more satisfaction out of this than any real estate development I’ve done. I’m just fortunate to have found this,” Homer said. And Oregon is fortunate, too. Homer’s vision and collaborative leadership have led to thousands of people accessing critical services.

With so many projects in the works, Homer’s team is busier than ever exploring partnerships and seeking funds to continue the work. Funds are needed for immediate basic services like tents and another mobile shower unit. Capital is also needed on a larger scale for building emergency shelter structures and converting hotels to apartments. But Homer has faith that the funds will come. “Generally, I have found that good ideas don’t die from lack of funding,” Homer said. “And I’ve always said, ‘All fishhooks in the water.’”

Pandemic and Wildfires Prompt Family Fund to Step Up Giving