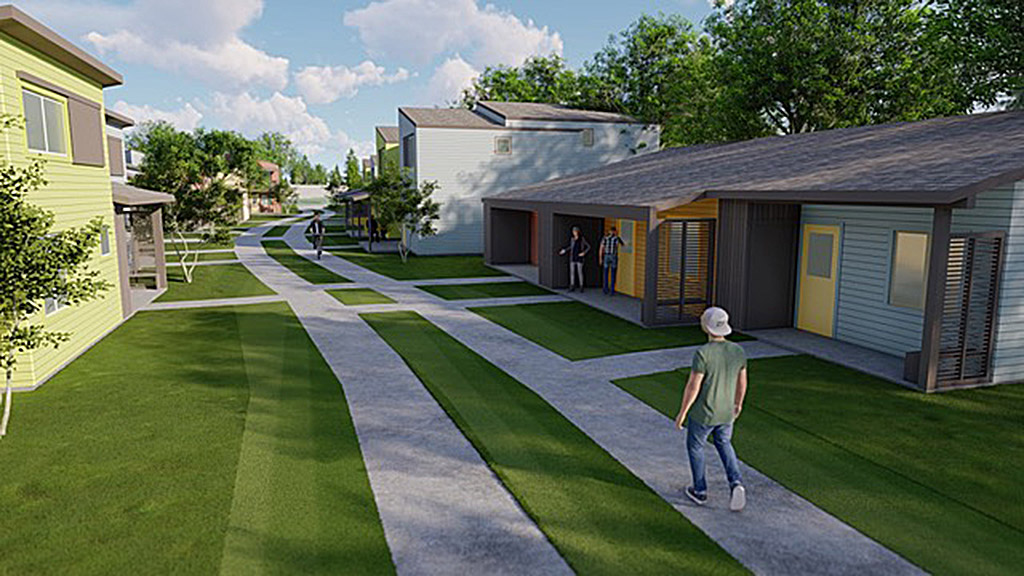 A rendering of Peace Village

Without stable, affordable housing, it’s tougher and sometimes impossible for kids to learn; for adults to hold jobs; and for families to pay for other basics like food, transportation, day care, and the costs to maintain their physical and mental health. In rural and urban communities throughout Oregon, 155,000 children and families endure housing instability and its ripple effects — not yet homeless, but on the brink.

Increasing the supply of affordable rental housing and pathways to home ownership, especially for lower-income Oregonians, could unlock the potential of tens of thousands of people, strengthen our economy and create a healthier state. In 2022, Oregon Community Foundation is helping to drive several diverse, innovative, and potentially scalable solutions to the state’s homelessness and housing crisis by providing critical early-stage support and leadership.

Yet another new OCF-supported effort, Peace Village in Eugene, features several innovations that set it apart — including a novel ownership structure that responds to both aspects of the dual crisis affecting Oregon and other West Coast states: The humanitarian catastrophe of thousands of people living without any shelter, and the affordable housing shortage that puts tens of thousands at risk of joining them.

SquareOne Villages, the Eugene nonprofit that is developing Peace Village, “is at the forefront of figuring out how we provide equitable and equity-building opportunities at a very low price point,” Loeb says. “It’s a powerful model.”

Set to open in late 2023, Peace Village will be comprised of 70 energy-efficient tiny homes — a  mix of studios, one- and two-bedroom units that range from 256 to 768 square feet. They will be available to people with very low incomes, including people who are currently unhoused.

The homes won’t be emergency shelter or transitional housing. Instead, residents will own their homes via a model that combines a housing co-operative with a community land trust, to prevent the property from returning to market-rate housing in the future. 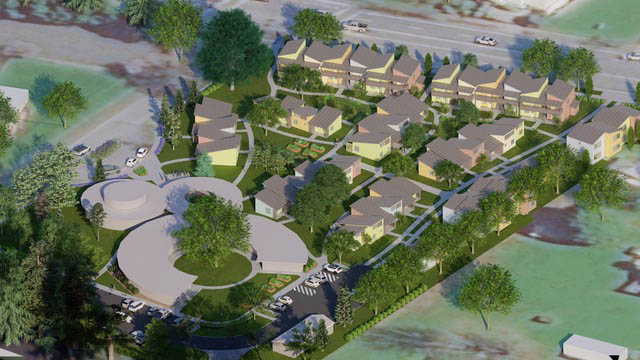 SquareOne will retain ownership of the underlying land, and residents will collectively own the housing on the land as members of the co-op. The co-op will hold the debt on the buildings (mortgage), and the residents (co-op members) will gain a limited amount of equity on their $5,000 one-time investment (like a down payment), at a rate of 3% per year.

Residents will pay a below-market monthly carrying fee tied to their income (similar to rent). A loan fund will help residents who cannot pay the full $5,000 down payment at move-in time.

The result will be new housing in Eugene that remains permanently affordable in two ways: Residents will be able to rely on a consistent monthly payment that won’t increase in response to market forces beyond what they can afford. And unlike conventional low-income rental housing that generally only locks in affordability for 30 years or less before reverting to market rates, the homes will be permanently available at affordable rates for people with low-incomes.

In other words, OCF donors and other funders who are helping to build Peace Village are creating affordable homes for low-income Oregonians that will remain that way forever.

“Deep affordability” plus the chance to build equity

Most home ownership programs serve people at 60% to 100% of the area’s average median income (AMI), says OCF’s Loeb. In contrast, homes at Peace Village will be available to households of various sizes (from singles to families with children) at 30% to 60% of Eugene’s AMI at application time.

Peace Villages stands out for this “deep affordability” and for providing the opportunity to build limited home equity to people who rarely, if ever, get that chance, Loeb says.

“There are no other equity-building models out there for this income range,” Loeb says. “Typically at this income level, you're not dreaming about building any type of equity in your housing. You're just hoping for housing that you can afford with your monthly Social Security payment or whatever limited income you have.”

More than 140 people have signed up to receive Peace Village applications, says Amanda Dellinger, SquareOne’s community relations director. Many are over age 60; several have disabilities.

Peace Village will rise on 3.6 acres northeast of downtown Eugene, home for decades to Peace Presbyterian Church. The congregation, which like many mainline Protestant churches is dwindling in number, sold the property to SquareOne at the below-market price of $600,000. The arrangement requires SquareOne to lease the use of the church buildings back to the congregation for $1 a year for up to 25 years.

It’s a win-win for SquareOne and Peace Presbyterian, which before the sale was facing closure  in as few as three years, says the Rev. Brian Heron, a top administrator for the Presbytery of the Cascades, a church region that includes portions of Oregon and Washington.

More broadly, the arrangement offers a path that other shrinking Protestant congregations should consider sooner rather than later, Heron says.

Among the 98 Presbyterian churches and worship communities in his region, one-third face potential closure by 2030, Heron says. Those that move quickly to transform into something new have an opportunity to thrive in a new form; meet critical needs in their communities; and ensure they leave a legacy in keeping with their Christian mission — to help those who need it most.

“Many decades ago, churches put our money into our communities in a different way, into hospitals and colleges. I think we're in the same place now, where we have tens of millions of dollars in assets in these churches. With the rapid decline of the congregational model, how are we going to continue our mission in the community in a new way?,” Heron says.

These include the federal government, which allocated $750,000 from the American Rescue Plan that enabled SquareOne to buy the land. The Oregon Legislature kicked in $3.3 million. Blue-inc. Capital, a private company based in Eugene, has offered below-market financing for the development. SquareOne is in conversation with Summit Bank and the Network for Oregon Affordable Housing to arrange a mortgage of $1.8 million after the project is complete.

Even more helpful than OCF’s recent support for Peace Village was a previous OCF grant to SquareOne in its early years, when it had only two employees, Bryant says. A $50,000 capacity-building grant from OCF “was the biggest contribution we received up to that point and very significant in helping us to develop the organization,” he says.

Since its founding, SquareOne has developed four tiny-home villages in Lane County, with two more including Peace Village in the works. It has also consulted with dozens of groups throughout the U.S. looking to replicate the model in their communities.

Says Bryant: “I look back now on that early support from OCF and say, wow, that has paid off multiple times.”

Faces of the Future